The BRICS countries (Brazil, Russia, India, China and South Africa) have made significant progress in setting up structures that would serve as an alternative to the IMF and the World Bank (which are dominated by the U.S. and the EU), according to RBTH. As WSJ reports, the U.S. would lose its veto power on the International Monetary Fund’s executive board under a plan being considered by some emerging economies. The countries are fed up with the United States’ failure to ratify a four-year-old deal to restructure the emergency lender. Yet more loss of credibility on the global stage and, as Brazil’s FinMin Mantega sums up, “the IMF cannot remain paralyzed and postpone its commitments to reform.” 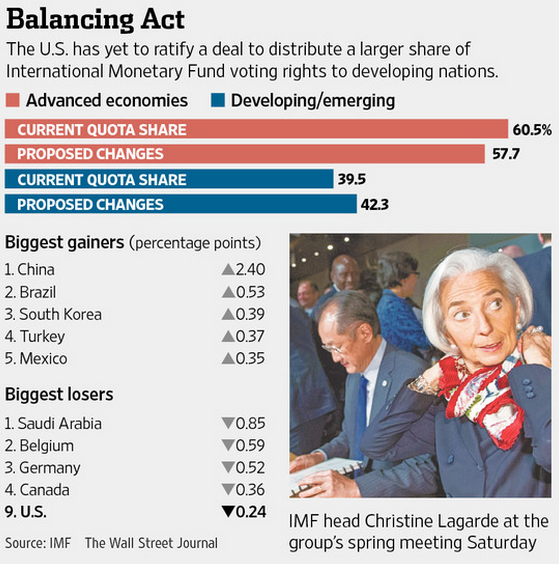 As The Wall Street Journal reports, the U.S. would lose its veto power on the International Monetary Fund’s executive board under a plan being considered by some emerging economies.

The countries are fed up with the United States’ failure to ratify a four-year-old deal to restructure the emergency lender.

Some members of the IMF’s steering committee indicated at a series of weekend meetings their desire to act now, underscoring the growing discontent abroad about the U.S. Congress’s delay in approving an international accord to overhaul governance at the fund.

“We are deeply disappointed with the continued delay in progressing the IMF quota and governance reforms,” the Group of 20 largest economies said in its communiqué.

“Alternatives to move forward with the reforms must be found whilst the major shareholder does not solve its political problems.”

And that is worrying for global stability…

Singaporean Finance Minister and IMF steering committee chairman Tharman Shanmugaratnam said it could cause “disruptive change” in the global economy.

“We are more likely over time to see a weakening of multilateralism, the emergence of regionalism, bilateralism and other ways of dealing with global problems,” he said in a news conference Saturday. That would make the world a “less safe” place, he said.

And, as RBTH reports, it seems the BRICS are not slowing down efforts to create their own IMF-alternative…

The BRICS countries (Brazil, Russia, India, China and South Africa) have made significant progress in setting up structures that would serve as an alternative to the International Monetary Fund and the World Bank, which are dominated by the U.S. and the EU. A currency reserve pool, as a replacement for the IMF, and a BRICS development bank, as a replacement for the World Bank, will begin operating as soon as in 2015, Russian Ambassador at Large Vadim Lukov has said.

Brazil has already drafted a charter for the BRICS Development Bank, while Russia is drawing up intergovernmental agreements on setting the bank up, he added.

In addition, the BRICS countries have already agreed on the amount of authorized capital for the new institutions: $100 billion each. “Talks are under way on the distribution of the initial capital of $50 billion between the partners and on the location for the headquarters of the bank. Each of the BRICS countries has expressed a considerable interest in having the headquarters on its territory,” Lukov said.

It is expected that contributions to the currency reserve pool will be as follows: China, $41 billion; Brazil, India, and Russia, $18 billion each; and South Africa, $5 billion. The amount of the contributions reflects the size of the countries’ economies.

The creation of the BRICS Development Bank has a political significance too, since it allows its member states to promote their interests abroad. “It is a political move that can highlight the strengthening positions of countries whose opinion is frequently ignored by their developed American and European colleagues. The stronger this union and its positions on the world arena are, the easier it will be for its members to protect their own interests,” points out Natalya Samoilova, head of research at the investment company Golden Hills-Kapital AM.

Perhaps the following sums it all up perfectly…

Economists warn the IMF’s legitimacy is at stake, and they say U.S. standing abroad is being eroded.