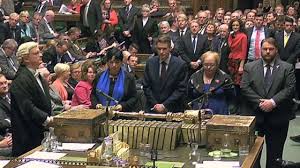 MPs have voted by a majority of 384 to allow Prime Minister Theresa May to get Brexit negotiations under way.

They backed the government’s European Union Bill, supported by the Labour leadership, by 498 votes to 114.

But the SNP, Plaid Cymru and the Liberal Democrats opposed the bill, while 47 Labour MPs and Tory ex-chancellor Ken Clarke rebelled.

The bill now faces further scrutiny in the Commons and the House of Lords before it can become law.

The prime minister has set a deadline of 31 March for invoking Article 50 of the Lisbon Treaty, getting official talks with the EU started. The bill returns to the Commons next week.

MPs held two days of debate on the bill, which follows last June’s referendum in which voters opted by 51.9% to 48.1% in favour of Brexit.

Foreign Secretary Boris Johnson, a leading Leave campaigner, called the Commons result “absolutely momentous”. Speaking on Facebook, he added: “We may be leaving the EU treaties. We are not leaving Europe.”

The UK would “forge a new identity” and make “an amazingly positive contribution” to Europe, he said.

This time last year few in Westminster really thought that this would happen. The then prime minister’s concern was persuading the rest of the EU to give him a better deal for the UK.

His close colleagues believed the chances of them losing, let alone the government dissolving over the referendum, were slim, if not quite zero.

This isn’t even the last vote on this bill.

There are several more stages, the Lords are likely to kick up rough at the start.

But after tonight, for better or worse, few will believe that our journey to the exit door can be halted.

Labour leader Jeremy Corbyn had imposed a three-line whip – the strongest sanction at his disposal – on his MPs to back the bill.

Shadow cabinet members Rachael Maskell and Dawn Butler quit the party’s front bench shortly before the vote, in order to defy his orders.

Also, 13 Labour frontbenchers voted against their own party position, apparently without first resigning.

Mr Corbyn said: “Labour MPs voted more than three to one in favour of triggering Article 50. Now the battle of the week ahead is to shape Brexit negotiations to put jobs, living standards and accountability centre stage.

“Labour’s amendments are the real agenda. The challenge is for MPs of all parties to ensure the best deal for Britain, and that doesn’t mean giving Theresa May a free hand to turn Britain into a bargain-basement tax haven.”

One MP was heard to shout “Suicide” when the result of the vote was announced.

Liberal Democrat leader Tim Farron, seven of whose nine MPs voted against the government, said: “The Tories and Labour have failed future generations today by supporting a hard Brexit.

“Labour’s leadership tonight have waved the white flag. They are not an opposition; they are cheerleaders.”

MPs will discuss the bill in more detail next week when it reaches its committee stage in the Commons, during which amendments to the government’s plans will be discussed.

The SNP’s foreign affairs spokesman at Westminster, Alex Salmond, said: “Next week there will be detailed questions and the calibre of the government will be judged by how they respond to the amendments.

Ken Clarke, the only Conservative MP to defy his party by voting against the bill, said the result was “historic”, but the “mood could change” when the “real action” of negotiations with the EU starts.

Earlier, the Commons voted against an SNP amendment aimed at scuppering the bill.

The bill was published last week, after the Supreme Court decided MPs and peers must have a say before Article 50 could be triggered.

It rejected the government’s argument that Mrs May had sufficient powers to trigger Brexit without consulting Parliament.

Talks with the EU are expected to last up to two years, with the UK predicted to leave the 28-member organisation in 2019.