BREAKING: Twitter Bans Political Dissidents for Foreign Governments, “We Do That a Lot for China” 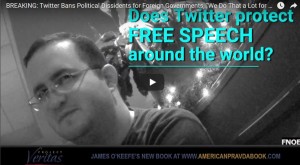 BREAKING: Twitter Bans Political Dissidents for Foreign Governments, “We Do That a Lot for China”

Another Project Veritas undercover investigation has revealed a former Twitter software engineer admitting that Twitter acts under the whims and pressures of foreign governments–notably China–by silencing and banning users at their request. In an undercover Project Veritas journalist asks Miranda if foreign governments pressure Twitter to ban certain people in their countries. Miranda initially tells the PV journalist that he “cannot disclose that information.” Another Project Veritas journalist met with Miranda on January 1, 2018. In this meeting, Miranda opened up and admitted that Twitter does in fact ban people at the whims of foreign governments. He also reveals some of the pressures that China in particular puts on Twitter if they do not comply.