Breaking Report: WH Leaker Found, Much Worse Than We Thought 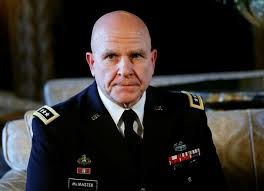 Breaking Report: WH Leaker Found, Much Worse Than We Thought

By Joe Saunders, published on Conservative Tribune, on March 21, 2018

If he’s right, Trump’s got more trouble than we thought… and conservatives are about to be proven right again.

The White House leaker might have gone too far for his own good.

Word that Trump ignored the written advice of his national security advisers to congratulate Russian President Vladimir Putin on his rigged election win during a phone call Tuesday had the nation’s capital in an uproar this week, and had some top Republicans saying there is only a short list of possible sources for the leak.

And National Security Advisor H.R. McMaster is going to have a lot to answer for.

It was a scene reminiscent of the earliest days of the Trump White House, when leaks to the media were occurring on a daily – it seems like hourly – basis.

Trump had barely talked pubicly about the phone call during a joint news conference in the Oval Office with Saudi Arabian Crown Prince Mohammad Bin Salman before The Washington Post was reporting the leak.

According to the Post, Trump ignored “specific warnings from his national security advisers Tuesday when he congratulated Russian President Vladi­mir Putin on his reelection — including a section in his briefing materials in all-capital letters stating ‘DO NOT CONGRATULATE,’ according to officials familiar with the call.”

Obviously, those “officials familiar with the call” probably weren’t supposed to go blabbing about their insights to the media, much less the anti-Trump Washington Post. And just as obviously, there has to be a very small number of people who could have known enough about the situation to talk.

North Carolina Republican Rep. Mark Meadows, the chairman of the conservative House Freedom Caucus, told reporters at a Heritage Foundation event on Wednesday that the leak “had to” come from the White House national security team headed by McMaster, according to the Washington Examiner.

“Here’s the big deal. If you’ve got the national security council team leaking to the press, that’s a big deal,” he said at a “Conversations with Conservatives” panel, the Examiner reported.

“Quite frankly, some of the other stuff they’ve leaked is actually a crime,” he added.

Among other lawmakers, the substance of the call was more important. Arizona Sen. John McCain, for instance criticized the call as giving Putin’s re-election a democratic legitimacy that it didn’t deserve. But they’re missing the point. Trump has been tougher on Russia than the doormat presidency of Barack Obama ever was, as Rep. Trey Gowdy pointed out on Fox News on Sunday. That doesn’t mean he can’t talk to the hard case in the Kremlin.

Vladimir Putin is going to be the leader of Russia for the foreseeable future. A shared phone call between the president of Russia and the president of the United States doesn’t mean the countries are friends, any more than contacts between previous American presidents and the dictators of the Soviet Union would have meant both sides weren’t fighting the Cold War to the death.

(America won and the Soviet Union died, thanks to Ronald Reagan. No one accused Reagan of coddling the Soviets when he met with then-premier Mikhail Gorbachev numerous times in the 1980s.)

But if the supposedly private counsel a president receives is going to be published by The Washington Post or some other news outlet in virtually real time, the Trump White House – and the country as a whole – has a real problem on its hands.

And that problem seems to be deep inside National Security Advisor McMaster’s wheelhouse. It’s just the latest time McMaster has been in the spotlight, and it’s rarely a good sign. When prominent conservative Sebastian Gorka left the Trump White House in August, for instance, his clashes with McMaster were considered to have played a key role.

Florida Sen. Marco Rubio has had his differences with Trump going back to when the two men battled for the GOP nomination in the 2016 primary. He said he didn’t approve of the call to Putin, but said the leak was worse.

“So, I don’t like what he did, but I really hate that there’s someone in his inner circle that’s willing to leak this stuff,” Rubio said, according the Examiner. “If you don’t like working for the president, you should resign your job.”

Considering how small the number of potential suspects is, this time it might be too late to resign.

The leaker might be getting a letter of a different kind, one that says, in all caps, “YOU’RE FIRED.”

And then some advice on hiring a good criminal defense lawyer.

3 Comments to “ Breaking Report: WH Leaker Found, Much Worse Than We Thought”