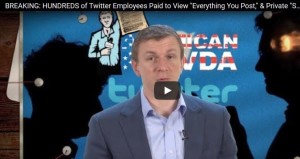 Project Veritas has released undercover footage of Twitter Engineers and employees admitting that Twitter employees view”everything you post” on their servers, including private “sex messages,” and “d*ck pics.” The engineers also admit that Twitter analyzes this information to create a “virtual profile” of you which they sell to advertisers.

James O’Keefe has just completed a book about this series entitled “AMERICAN PRAVDA: My fight for Truth in the Era of Fake News.” The book will be released by St. Martin’s Press on January 16, 2018.