Breaking: Ghislane Maxwell Arrested by FBI! Is She The Center of The Entire Epstein Case? 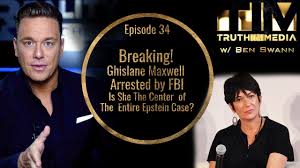 Breaking: Ghislane Maxwell Arrested by FBI! Is She The Center of The Entire Epstein Case?

Two senior law enforcement officials say that Ghislane Maxwell was arrested on charges that she conspired with Jeffery Epstein to sexually abuse minors and is expected to appear in federal court later Thursday. The six-count indictment in Manhattan federal court alleges that Maxwell helped Epstein groom girls as young as 14 years old, going back as far as 1994. “In some instances, Maxwell was present for and participated in the sexual abuse of minor victims,” the indictment says.