BREAKING: FBI Releases Docs Claiming RT Founder Beat Himself to Death in His Hotel Room
The FBI just released the results of their investigation claiming that the media mogul and found of RT killed himself by repeatedly smashing his head and upper body into the ground.

ByMatt Agorist, published on the Freedom Thought Project, on January 27, 2018 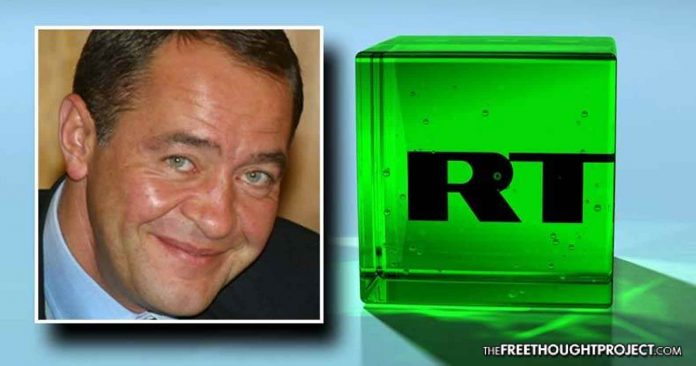 Washington D.C. — In November 2015, the Free Thought Project reported that Mikhail Lesin, the former head of media affairs for the Russian government, and the founder of Russia Today (RT), was found dead in the hotel room that he was staying at in Washington DC.

Originally, authorities announced that Lesin died from a heart attack. However, the results of his autopsy released months later indicated a far more sinister cause of death and the heavily redacted FBI documents that were just released add to that story.

The documents, detailing the FBI investigation into Lesin’s death were just released Saturday morning in spite of the investigation ending in October of 2016.

Now, FBI investigators have released the results of their investigation claiming that the blunt force trauma all over his body was self-inflicted.

“Mr. Lesin died as a result of blunt for injuries to his head, with contributing causes being blunt force injuries of the neck, torso, upper extremities, and lower extremities, which were induced by falls, with acute ethanol intoxication,” the report states.

In other words, the FBI is claiming that Lesin got so drunk that he repeatedly and violently fell on things until he killed himself.

To show just how much information the FBI is willing to release on these findings, here is the version of the amended autopsy report they released in the report. 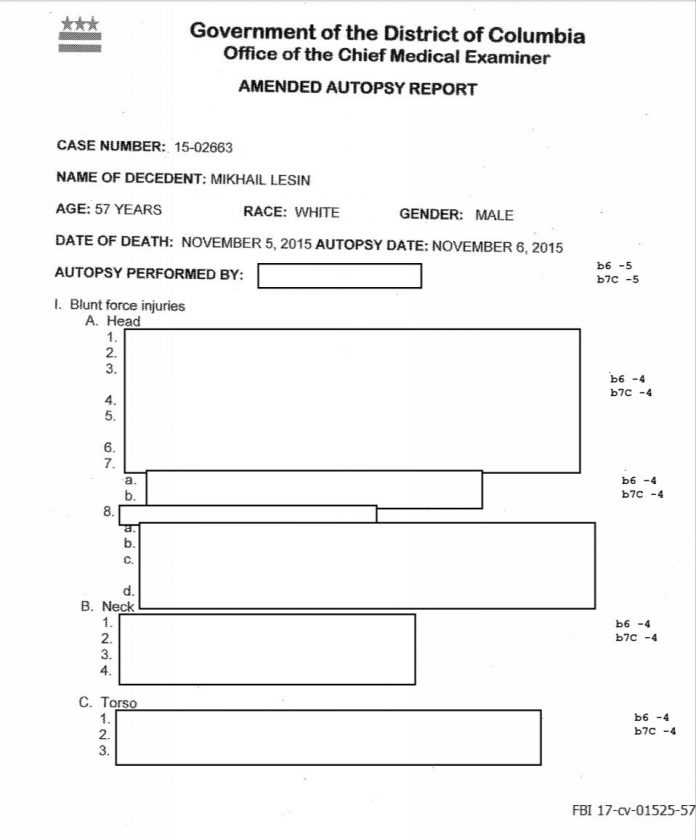 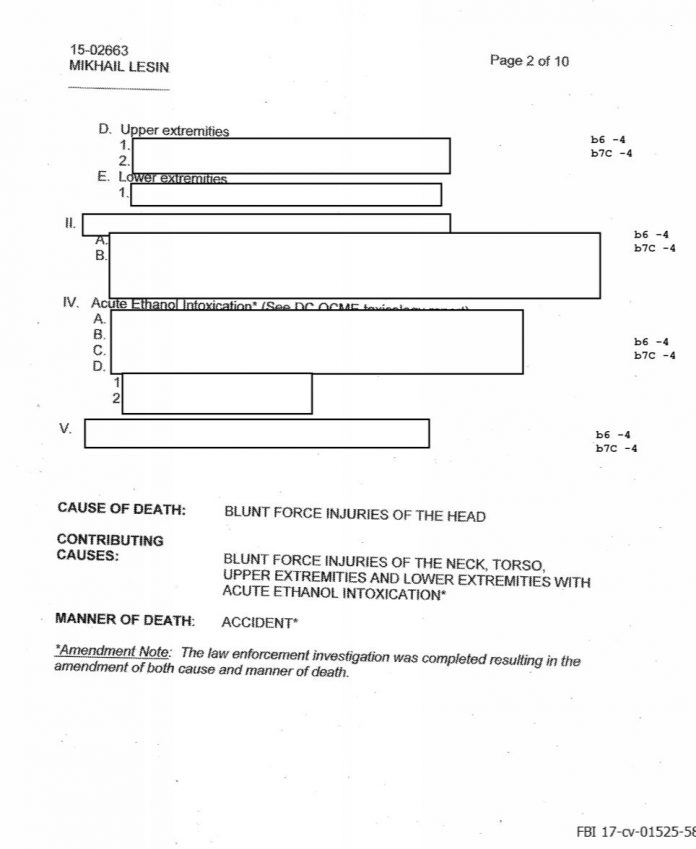 Essentially, all other information in regards to the findings of Lesin’s death has been scrubbed from the documents as the remaining pages are almost entirely redacted.

Not only did the US remain tight-lipped on the investigation but they also refused to allow Russian authorities to cooperate.

As RT reports, back in 2016, months before the closing of the case, Moscow said it was expecting Washington to explain why Russia had not received any details from the probe into Lesin’s death, despite repeated requests.

“We are awaiting the related clarifications from Washington and the official data on the progress of the investigation,” Foreign Ministry spokeswoman Maria Zakharova wrote in a Facebook post at that time. She added that if the media reports citing the forensic statement are confirmed, Russia will send an official request to the US “for international legal assistance.”

In October 2016, the US authorities announced that Lesin died of natural causes and closed the case. “Based on the evidence, including video footage and witness interviews, Mr. Lesin entered his hotel room on the morning of Wednesday, Nov. 4, 2015, after days of excessive consumption of alcohol and sustained the injuries that resulted in his death while alone in his hotel room,” the US attorney for the District of Columbia said in a statement.

Lesin’s death came at a time where he was surrounded by controversy, especially in the US. RT, the Russian-based news source that Lesin founded has become very controversial in the US—ostensibly for the fake Russiagate scandal—but in reality, for challenging the western narrative of foreign policy and privacy issues. Some US politicians have suggested that RT be banned in the US for “spreading propaganda,” while others have been blatant enough to attack Lesin personally.

According to the NY Times, until late 2014 Lesin ran the media wing of the state’s energy giant, Gazprom, before stepping down or, more likely, being forced out. He ended up in the United States, where he and his family owned properties in Los Angeles said to be worth far more than the salary of the former government minister.

Some US Senators, including Roger Wicker of Mississippi, had called for the Department of Justice to open an investigation into Lesin’s finances prior to his death.

Wicker was concerned that Lesin made too much money, something that was really none of his business.

“That a Russian public servant could have amassed the considerable funds required to acquire and maintain these assets in Europe and the United States raises serious questions,” Wicker said.

The original announcement of the heart attack back in November 2015 makes this case all the more ominous considering the fact that the medical examiner’s office also said Lesin’s body had blunt force trauma to the neck, torso, arms and legs too. How did authorities overlook his wounds?

As RT reports, Lesin was considered one of the most influential figures in the Russian media landscape. A graduate of Moscow State University with a degree in Civil Engineering, he served as Minister of Press and Mass Media from 1999 to 2004. He was also a presidential media adviser from 2004 to 2009. Lesin became chief executive officer at Garprom-Media in 2013 and remained in the position until early 2015.