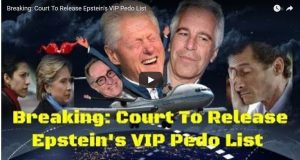 A New York District Court is set to release the names of “VIP abusers” connected to convicted pedophile billionaire Jeffrey Epstein. Epstein was accused of romps with underage girls on his private jet, known as the “Lolita Express.” Epstein had a team of traffickers assembled to kidnap and deliver females as young as 12 to his private island in the U.S. Virgin Islands. Plus…’Smallville’ actress Allison Mack has been arrested for helping to run an elite child sex cult with girls as young as 12 years of age. David Zublick unseals the horrible truth in this special report!