I really didn’t think I’d see something like this from Cobra’s blog. But I welcome the new approach wholeheartedly!

To amplify, there’s is no debt owed the bankers.  And we should forgive them, But let us not repeat the same mistake of running the same systems with the same people all over again and calling it freedom.
Recently the Pope asked for a new centralized banking system run with “spiritual principles”. The Vatican was always the center the existing western banking systems, “from sea to shining Holy See”. How well did they fulfill their “spiritual principles” the last go around?
There is no need for the Pope to declare a Jubilee to reset a banking system for which no debt is owed, unless of course he still wants to be the center of it.  If anything YOU are owed value by them.  And that too should be forgiven.
The Chinese Dragon families were always the ultimate funders of the banking systems.
All bank owned corporations posing as the people’s governments were declared null and canceled in un-rebutted UCC law filings by the One People’s Public Trust in December 2012 for running slavery systems under the color of law.
All pertinent contracts to those systems which did not disclose that humanity is the I AM Eternal Essence in Body, were declared null and canceled, including but not limited to Universal systems, Galactic systems, soul contracts, karma, financial contracts, humans as chattel property, birth certificate bonds, prison bonds, court bonds, etc.  and other means of harvesting energy from individual perceptions of I AM Eternal Essence in body on Earth without full and open disclosure were declared void and cancelled.
What began as limited time contract for the choice of  experience of I AM ended with a contract, so that ALL I AM can move to better things.  This experience will never be repeated again, EVER.
Those who played roles as the partners in contrast, just forgot they were playing the role of contrast.  They lost contact with their heart, from which all energy flows from Creator Source so they extracted their energy from others, often cruelly so.
All humans on this planet are multi-dimensional beings, who have been temporarily cut-off from the knowledge of who they are by an artificial energetic veil for the specific purpose of experiencing the illusion of being separate from all that is, Source Creator.
All beings have have within their multi-dimensional selves played roles of dark and light, either as humans, ETs, divinities, celestials, elementals or angelics.  You are all those. To condemn Cabal you must also condemn yourself, for you have played those roles too. Even if in this recent life you did not.  You are more than one perception of I AM and you have played them all simultaneously.

If you haven’t already started to have dreams, memories return of those existences (or fractals of existence) you soon will, as the energies rise on this planet. You are much more than you think you are. There is no time, therefore no past life, there is only the NOW.

Each being was separated within itself with a polarity of light and dark and every shade between for the purpose of experiencing separation from WHAT IS.

Even those that thought themselves the paragon of light were not immune from the separation. The first such separation being the creation of a spiritual hierarchy (in light and dark).

Every human on earth is already a MASTER OF ASCENSION, or they would not be here at this time.

You owe God nothing because you are the Creator. Creator gives freely to all perceptions within I AM without discrimination or reservation.

All are ONE, all are Source, I AM Eternal Essence in body.  ALL IS LOVE.

-AK
PS: Whether a financial reset occured on the 17th of March, I cannot say. I had no advance knowledge of that.  We will see.  I know who must sign off on that, as do the those who wish to see that happen.  If it was reset, it will soon be irrelevant as ET technologies come that make the need for money (or gold as a currency) moot.
We are moving way past the Jetson’s where we are going… 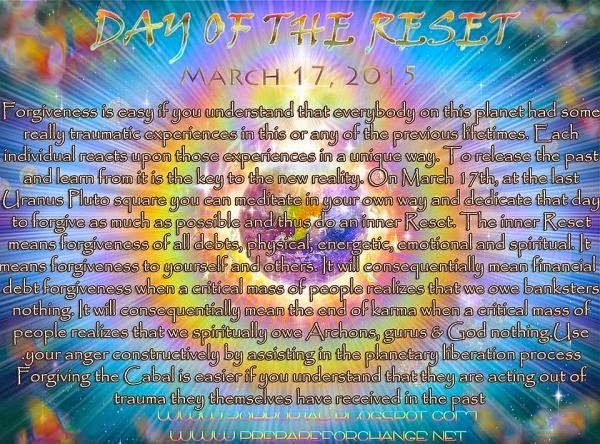 Cobra text below for readability:
Forgiveness is easy if you understand that everybody on this planet had some really traumatic experiences in this or any of the previous lifetimes. Each individual reacts upon those experiences in a unique way. To release the past and learn from it is the key to a new reality.
On March 17th, at the last Uranus Pluto Square you can meditate in your own way and dedicate that day to forgive as much as much as possible and thus do an inner Rest. The inner Reset means forgiveness of all debts, physical, energetic, emotional and spirtual. It means forgiveness to yourself and others. It will consequently mean financial debt forgiveness when a critical mass of people realizes that we owe banksters nothing. It will consequently mean the end of karma when a critical mass of  people realizes that we spiritually owe Archons, gurus, & God nothing.
Use your anger constructively by assisting in the planetary liberation process. Forgiving the Cabal is easier if you understand that they are acting out of  trauma they themselves have received in the past.