Brace Yourself For Italy’s Bankruptcy

Brace Yourself For Italy’s Bankruptcy

Submitted by John Mauldin via MauldinEconomics.com,

When Charles Gave, paterfamilias of Gavekal, chooses to express displeasure over an economic trend, an asset class, or what have you, he does not exactly mince words. If you happen to be in the room when he does so, he can sound like the Voice of God Himself, declaring from on high. And with his longish flowing white hair, he actually looks like central casting setting over to play the part.

Today Charles is exercised about Italy. He first reminds us that when Italy adopted the euro in 1999, he had argued that Italy would change from being an economy with a high probability of many currency devaluations to one with the certain probability of eventual bankruptcy. Now, he says, the fateful moment is not far off.

He gives us a couple of before-and-after charts: before March 1999 and from March 1999 to the present, in which he compares Italian and German industrial production and the performance of their respective stock markets. He notes that from 1979 to 1998, Italian industrial production outpaced Germany’s by more than 10%, and Italian equities outperformed German equivalents by 16%. That’s after taking into account the devaluations. Northern Italy is actually a production powerhouse, or was…

Then came the euro. Since 1999 Italian stocks have underperformed German stock by 65%, and since 2003 Italian factory output has lagged Germany’s by 40%. Thus, summarizes Charles, in this short essay,

The diagnosis is simply that Italy has become woefully uncompetitive, and as a result, is not solvent. This much is clear from the perilous state of its banking system, which is always the outcome when banks lend to firms that have been rendered uncompetitive by some reckless central banker…,

This has to be the most well-telegraphed, and now inevitable, national bankruptcy that I have seen in my 45-year career.

Putting the Boot into Italy

Matteo Renzi has joined a long line of Italian prime ministers who failed to “reform” their country. This is another way of saying that he could not wave a magic wand and make Italy competitive with Germany. The grim reality is that no Italian leader stood a chance of changing their country once the fateful decision was made to peg its currency to Germany’s. At the time of the euro’s launch in 1999, I argued that the risk profile of Italy would change from being an economy where there was a high probability of many currency devaluations to the certain probability of eventual bankruptcy. Sadly, that moment is not so far away.

The chart below tells the story of Italy’s recent economic history in two parts, namely, (i) March 1979 to March 1999, and (ii) March 1999 to the present. Italy joined the Exchange Rate Mechanism in 1979 at 443 lira per deutschemark, yet by 1990 frequent devaluations meant that rate had slid to about 750 lira. By the early 1990s, the Bundesbank was overseeing a newly unified German monetary system and in order to fight inflation it had driven real interest rates to 7%. By September 1992 the stresses on the system caused the UK, Sweden and Italy to exit the ERM, which meant another huge currency devaluation, pushing the lira as low as 1250 against the deutschemark, but delivering a huge tourist boom to boot. 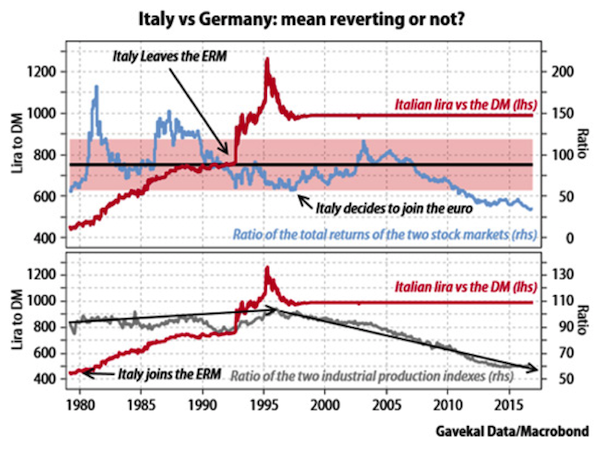 Still, from 1979 to 1998 Italian industrial production outpaced that of Germany by more than 10%, while Italian equities outperformed German equivalents by 16% (this indicates that Italian firms were earning a higher return on invested capital than those in Germany).

Then came the euro. By 2003 it was clear that Italy was uncompetitive and subsequently, Italian equities have underperformed German equities by -65%, reversing the previous half century’s pattern when Italian equities outperformed on a total return basis. Similarly, since 2003 Italian factory output has lagged Germany’s by 40%.

The diagnosis is simply that Italy has become woefully uncompetitive, and as a result, is not solvent. This much is clear from the perilous state of its banking system, which is always the outcome when banks lend to firms that have been rendered uncompetitive by some reckless central banker. Short of imposing Greek-style slavery on Italy, there is not much hope of solving the problem, but I rather doubt that the Italian electorate will be as patient as its neighbours across the Ionian sea.

As such, the relationship between Italy and Germany is radically different from that in the 1945-99 era when a natural return toward equilibrium was achieved through exchange rates adjustments. The only possibility on the current trajectory is that the Italian and German economies keep diverging, which is why a “normal” resolution cannot be achieved.

Hence, an Italian sovereign default of some variety is now a near certainty. While a central bank can address a liquidity problem, it cannot fix a solvency issue, especially one as large as Italy’s. The only remedial action that can now be taken is to throw good money after bad, which is exactly what I expect Mario Draghi to do, especially as he played such a key facilitators’ role in getting Italy into the euro system in the first place. Such actions – possibly to be announced on Thursday at the European Central Bank’s policy setting meeting – can of course merely postpone the day of reckoning, but will solve absolutely nothing.

The rational approach for investors is to shun Italian financial assets such as bank equities or government bonds until such time as exchange rates are once again market determined prices. This has to be the most well-telegraphed, and now inevitable, national bankruptcy that I have seen in my 45-year career. There is no reason to be dragged under the steam roller as there are many other markets and assets to play in.

Every week, celebrated economic commentator John Mauldin highlights a well-researched, controversial essay from a fellow economic expert. Whether you find them inspiring, upsetting, or outrageous… they’ll all make you think Outside the Box. Get the newsletter free in your inbox every Wednesday.