Leila project, billed as a ‘library of things’, has proved so popular it has spawned similar initiatives across the country 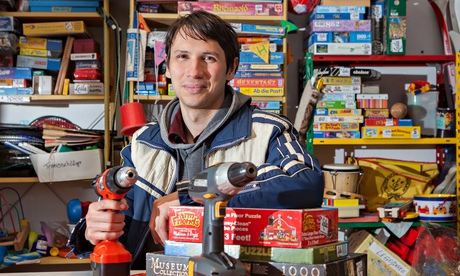 Nikolai Wolfert, who started the Leila ‘borrowing shop’ in Berlin, says drills are among the most popular items. Photograph: Christian Jungeblodt

The most popular items in Berlin’s first “borrowing shop” are the electric drills. At least one of the local people who have registered with Leila – a little shop on Fehrbelliner Strasse, north-east of the city centre – seems to be continually fixing shelves or hanging pictures.

But it’s not worth buying that person their own tools, said founder Nikolai Wolfert. “The average electric drill is used for 13 minutes in its entire lifetime – how does it make sense to buy something like that? It’s much more efficient to share it.”

Wolfert, 31, came up with the idea for Leila after the Green party failed to win the 2011 Berlin elections and he started looking for ways of doing politics at a more local level. Four hundred residents have signed up to the project, which he says is less a charity shop than a “library of things”.

Members can borrow anything from board games to wine glasses, fog machines to hiking rucksacks, juicers to unicycles. All they need to do to become members is drop off an item of their own. “This is not just about doing charity out of magnanimity – the shop makes sense because it’s more efficient,” Wolfert said. “We think in a decentralised way – that’s how the big supermarket chains think too.”

Since its launch in June 2012, Leila has inspired imitators across the country. Borrowing shops are under development in several Berlin districts, with similar projects being set up in Kiel and Vienna. Würzburg has its own Leihbar, or “borrowing bar”, and a cafe in Berlin-Wedding has set up a Dingeschrank, or “cupboard for things”. Other collaborative projects with an emphasis on sharing resources are popping up all over the German capital.

In Wedding, 80 artists are working with recycled materials to build Berlin’s first “indoor treehouse“, which will eventually serve as a “local public thinktank”. In Neukölln, the Trial & Error culture lab organises swaps for artists’ materials and fashion items.

At the more commercial end of the spectrum, Deutsche Telekom recently helped launch the social network wir.de, which allows neighbours to swap tools and services and sets up communal “toy boxes” in playgrounds around Berlin.

“Everyone is talking about the sharing economy”, said co-founder Christian Ridder. “We wanted to see if it would work not just for flats and cars, but also on a smaller scale.”

The notion of the “share economy” may have been coined as long ago as 1984, by Harvard economist Martin Weitzman. But there is a sense that the shift away from ownership towards functionality is nowhere as tangible in Europe as in Berlin.

If Berlin is establishing itself as the sharing capital of Europe, said futurologist Peter Wippermann, it is above all because of the unique intersection between the alternative green movement and old industry.

Elsewhere on the continent, the share economy may be defined by start-ups such as Airbnb, which matches travellers to people with rooms to rent, he argued, “but in Germany it’s driven by grassroots projects like Leila on the one hand and big companies like BMW and Daimler on the other, who were quick to latch on to the car-sharing idea”.

With 760,000 registered users, Germany is pioneering car-sharing in Europe – not least, experts say, because initiatives such as Car2Go, DriveNow or Tamyca tie in with more old-fashioned “hitch-a-ride” schemes that used to be popular with students and hitchhikers.

So far, most of these developments have taken place without the support of the city itself, said Dorothee Landgrebe, of the Heinrich Böll Foundation. “The state could do a lot more to support genuinely ecological projects such as borrowing shops and help identify those who exploit sharing schemes for their own profit.”

Airbnb, for example, is facing legal challenges in the US, because some homeowners are allegedly using the service to dodge taxes applicable to hotels or bed and breakfasts.

At Leila, Wolfert still works on a volunteering basis. The rent is just about covered through donations. When he first came up with the idea for his project, he contacted the local borough for support, but got no response.

“It was never my aim in life to open up a shop,” he said. “I always wanted to do something political. The share economy is a good idea, but we shouldn’t allow it to be reduced just to the economy.”