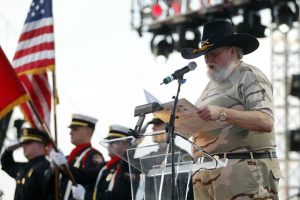 Almost every day for the last several years, I have tweeted “Benghazi ain’t going away” on my Twitter page.

There are a couple of reasons. First of all, I have met the three men who were fighting the mob from the roof of the embassy annex, getting shot all to hell in the process.

They find it to be ridiculous that help could not have been sent and arrived in time.

Secondly, the battle lasted for thirteen hours and considering the fact that a commercial airliner can fly across the Atlantic Ocean in half that time and the proximity of military bases close enough to send help makes Barack Obama and Hillary Clinton one of two things, either the two stupidest, most inept people whoever became President of the United States and Secretary of State or downright bald-faced liars.

Their contention that there was no stand-down order given did not make sense because “no man left behind” is at the core of the brotherhood of those who protect this country and there would have been literally thousands of warriors who would have been chomping at the bit to come to the aid of their brothers in arms.

Since Susan Rice went on TV and told the world that the “protest” was fueled by some anti-Muslim videotape – that some obscure and, so far, unseen film producer had made – and was played on some video outlet and Hillary’s famous “WHAT DIFFERENCE, AT THIS POINT, DOES IT MAKE?” statement, little has been said, but this incident is viewed as a betrayal by true warriors and Americans with enough sense to step over a crack in the sidewalk and at last the first – hopefully the first of many more – first-hand accounts has surfaced.

I have received permission to publish the account of a Marine who was in the region and could have arrived with adequate troops and armament to turn the tide had not the Secretary of State had not interfered.

I will let him tell you in his own words:

“I was the Officer in Charge of the Marine response after the Benghazi attack of 2012, in which the American consulate was destroyed and the Ambassador murdered. Our mission was to reinforce the Embassy. I was in charge of a program that had a company of Marines aboard a US Navy amphibious ship (USS McHenry) conducting amphibious landing exercises around Africa. After the attack happened, we were re-tasked to respond and protect the Embassy. We came up with a plan that included inserting 250 Marines and all their weaponry using Osprey tilt-rotor aircraft, refueling in flight with Air Force tankers, inserting directly into the Embassy. Unbeknownst to most, the State Dept. must approve of military action to reinforce embassies and consulates. At the last minute, Secretary of State Hillary Clinton said our plans and actions would “send the wrong message” and that we didn’t want to appear to be “invading the Middle East”. Keep in mind, the American ambassador was just murdered and his body assaulted in a terrorist attack timed to coincide with the 9/11 anniversary. Ultimately, we were directed to insert the Marines via commercial type aircraft and then chartered bus, and not in uniform. In addition to exposing the Marines to incredible risk, it ensured massive delays as well. Contrast that with the response to the current situation with the Embassy in Iraq. It really struck me when I saw the fully outfitted and uniformed Marines reinforcing the Embassy via tactical aircraft landing right on the spot. Followed by 4,000 Army paratroopers moving into position to respond. And now, as of today, 2,000 more Marines enroute. Quite a difference isn’t it?” – Jon Myers January 2, 2020, from his Facebook account

You see, this thing could have been over within a matter of minutes, the troops could have inserted directly onto the embassy grounds, made short work of the bad guys and rescued the survivors and let the world know that America will not tolerate being attacked.

But when you have a Secretary of State who would rather “look diplomatic” than to save American lives and a president with an undeniable soft spot for Islam and neither one of them have any idea of what in the hell they are doing, that’s the kind of catastrophe that results.

Now, what was Ambassador Stevens doing in Benghazi anyway?

There are strong reasons to believe that Ambassador Stevens was sent to Benghazi to secretly retrieve U.S. made Stinger Missiles that the State Department had supplied to Ansar al-Sharia in Libya WITHOUT Congressional oversight or permission and that one of the stingers had found its way to Afghanistan and downed an American Chinook helicopter.

Did it really make sense that Hillary Clinton, who has been involved in the upper echelons of government most of her life would be so dumb as to think she could get away with having state secret documents going back and forth on a private server not protected by the government’s vast security apparatus?

And then go to the limits she did to destroy over thirty-thousand emails to remove the evidence of the business she was conducting on that server.

Two things; arrogance and the cocksure conviction that she would be the next president and could make all of this go away with the wave of her hand.

Folks, the Benghazi incident is a festering sore, a huge lie and an act of betrayal at the highest levels of our government and has got to be exposed, for several reasons.

First of all, to give some closure to three warriors who laid their lives on the line for America against overwhelming odds while sustaining grave wounds for thirteen hours.

Mark Geist, Kris Paronto and John Tiegen deserve at least that much.

To honor the deaths of four Americans who died that day, to at least let the world know why Ambassador Chris Stevens, Glen Doherty, Sean Smith and Tyrone Woods were murdered and who was responsible for it.

And lastly, to punish the guilty.

There is a very popular phrase around Capitol Hill these days on the Democrat side of the aisle,

Well Ms. Pelosi, Mr. Schiff, Mr. Nadler and Mr. Schumer, we’re about to find out which side of your mouths you’re talking out of.

Pray for our troops our police and the peace of Jerusalem.

What do you think?