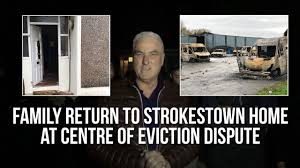 A large crowd gathered outside the Strokestown home at the centre of an eviction dispute on Monday night after two of the three family members returned to their home in the afternoon. Many had travelled long distances, including from Navan, Mullingar, Kilkenny, Castlebar, Dublin and Athlone. Anti-eviction activists Ben Gilroy, from Navan, and Gerry O’Boyle, from the Mayo/Roscommon border, were among those present, while deputies Eugene Murphy and Michael Fitzmaurice also came to the house to give words of comfort to the family.

A fire was blazing outside to keep people warm. The Irish Times reported that two rounds of silage wrapped in back plastic, were allegedly used to block the L1420 road leading to the house on Sunday morning before anti-eviction activists stormed the house to evict the security team occupying the home. Spokesperson for the family Donal Hanley said the family are asking for privacy and for what’s been described as the “media circus” around the incidents to go way.

He said the family are almost broken by the recent events and are very grateful for all the support. There were no disturbances reported at the house during the night and KBC have not attempted to take possession of the property again. Ben Gilroy believed that RTÉ had published some false reporting surrounding the events because while their report quoted Leo Varadkar as being disgusted at the violence meted out to the British security team hired to repossess the property, he was not asked to comment about the violence the security team dealt to the family living in the home and their supporters. One supporter was a retired garda who had his teeth broken while gardaí stood outside the home insisting they could not get involved because it was private property.

Gilroy also advised other families who find themselves in a similar situation that anyone not on a mortgage who has been living in a property for over twelve years has an “equitable interest in the property which can not be defeated by a bank’s charge”. He also said that he believes 90% of mortgages are not valid in Ireland. According to a solicitor who was heard on Newstalk, it was not KBC bank who hired the security team tasked with repossessing the home, but the local Sheriff who gets a poundage commission for each home repossessed from the banks.