BBC: ‘Chemtrails’ To Be Recognised As New Type Of Cloud

BBC: ‘Chemtrails’ To Be Recognised As New Type Of Cloud 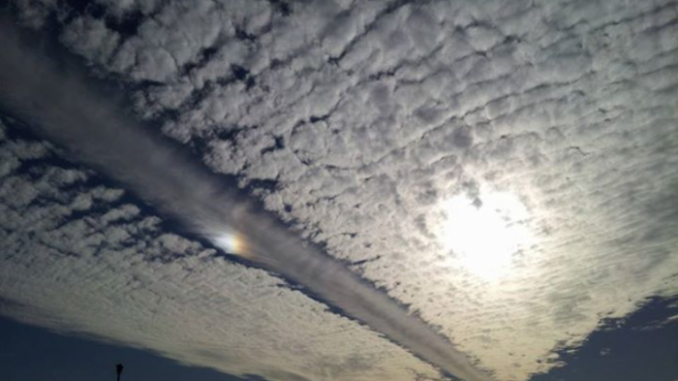 According to the BBC, chemtrails are to be officially recognised as a new type of cloud in the International Cloud Atlas.

According to BBC meteorologist John Hammond, the trails left behind in the sky by airplanes, known by many as ‘chemtrails’, will now be added to an official cloud reference encyclopedia, solidifying their status as a scientifically recognised phenomena.

“In the modern day you will look up to the sky and see clouds made by airplanes. Once they are made they can linger for days,” John Hammond says.

Now, embracing the digital era, the new atlas will initially be available as a web portal, and accessible to the public for the first time.

The World Meteorological Organisation (WMO) publishes the atlas, and also has the final say on the contents, including the addition of “new” clouds and cloud features.

This time around 12 new terms have been added. The best known of these is asperitas, meaning rough-like in Latin, as the clouds can look like the tossing of the waves at sea when viewed from below.

These clouds were first recorded over Iowa in the US in 2006, but soon a torrent of similar images from around the world began to pour in to the Cloud Appreciation Society, a citizen science body.

They began to lobby the WMO for official recognition of the cloud type. But the fact that it has now been officially included came as something of a surprise.

“Back in 2008, I thought the chances of this becoming official were really minimal,” said Gavin Pretor-Pinney, president of the society.

“At first the WMO were saying they had no plans to do a new edition, but over time I think they began to realise there is an interest among the public in clouds and there is a need for that interest to be an informed one, there’s a need for this authoritative work.”

Asperitas becomes the first addition of a new recognisable term since 1953. In addition several other supplementary features of clouds have also been added including cavum, cauda (known as a tail cloud), fluctus and murus (known as a wall cloud).

In terms of the way the WMO classifies clouds, they have also added one new “species” – the volutus, or roll-cloud, a low horizontal tube-shaped cloud mass that appears to roll about a horizontal axis.

A key element in the evolution of the atlas has been the impact of technology. People all over the world are able to capture and exchange images on their smart phones of fleeting cloud formations.

“People don’t have to be an official weather observer, they don’t have to be schooled in the finer points of the International Cloud Atlas, they just go ‘that’s amazing’ and take a picture and send it to us, and being in the centre of that network we can spot a pattern,” said Gavin Pretor-Pinney.

The atlas also includes a recognition of the processes that can lead to cloud formation, so the clouds that arise from wildfires are now classified as flammagenitus.

Similarly patches of cloud that are formed over forests and over waterfalls are classified, but also one of the most widely seen features in the sky, contrails formed from the exhausts of airplanes, are given greater recognition.

“In the modern day you will look up to the sky and see clouds made by airplanes. Once they are made they can linger for days,” said BBC meteorologist John Hammond.

The new atlas also recognises some weather features that not everyone might agree can be seen as clouds. These include rainbows, halos, snow devils and hailstones.

“There is a blurred edge between what is a cloud and what is a sheet of hail falling from the sky,” said John Hammond.

“There are grey areas around the edge of this. All types of optical effects can be defined as clouds, be they halos or snow devils or rainbows, but I’m a little bit old-fashioned and I struggle with the inclusion of rainbows as clouds.”

Hammond believes that there will be many new entries in the future as long as the public remains engaged in the subject and he believes the opening up of the atlas via a web portal is a very good thing towards that end.

Gavin Pretor-Pinney from the Cloud Appreciation Society agrees that opening up the atlas is a huge positive.

“The value of the atlas is that it draws our attention to the sky and by learning the name of the formations, that is the way we pay attention to and value what we see around us.