Barney Carries Through on His Freedom and Right with Police Officer 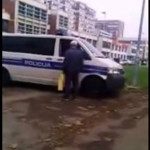 Barney Carries Through on His Freedom and Right with Police Officer

“Barney was crossing a road, and police wanted to give him a fine of appx $50. He refused to give them his ID, told them they are unaware of their status as corporate employers, but as public servants they should help him to excercize his right to go freely where he wants, he told them that there can not be any offense since he did not harm anyone and since their law says time of offence is time when offender was working and he is not working at that time, he addressed declaration of human rights and constitution as laws above their penal law and warned them that they are violating his rights, he also asked them is he detained or arrested and finally he walked away as free man, because his conscious is fully aware of that very fact – that he is free.” – Vladimir