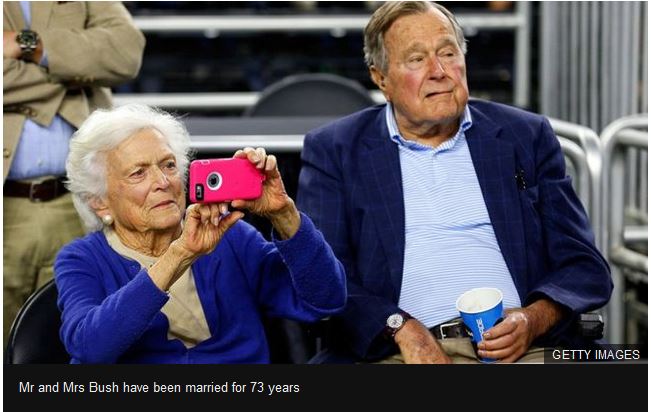 Ailing US former First Lady Barbara Bush has declined further medical treatment and will spend her time in “comfort care” with her family.

Mrs Bush, 92, made her decision after a series of recent hospital visits, a statement from the office of husband George HW Bush said.

Mrs Bush played an active role whilst first lady, championing the cause of adult literacy among others.

Her husband, at 93, is the longest-lived US president.

The statement from his office read: “It will not surprise those who know her that Barbara Bush has been a rock in the face of her failing health, worrying not for herself – thanks to her abiding faith – but for others.”

It added: “She is surrounded by a family she adores, and appreciates the many kind messages and especially the prayers she is receiving.”

The statement did not reveal the nature of Mrs Bush’s ailments.

Mr Bush, who served as US president from 1989-93, suffers from a form of Parkinson’s disease and uses a wheelchair.

The couple have been married for 73 years.

Their son, George W Bush, was elected president in 2000 and served two terms as the nation’s 43rd president.

Mrs Bush is the only woman to have seen both her husband and son sworn in as US president.

She is not, however, the only woman to have been both wife and mother of presidents.

Abigail Adams was married to the second US president, John Adams, and was the mother of the sixth, John Quincy Adams.