Barack Obama: says Washington ‘Has to Change’ Referring to The ‘Manufactured Crisis’ 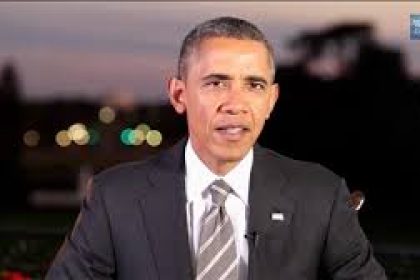 Barack Obama: says Washington ‘Has to Change’ Referring to The ‘Manufactured Crisis’

The US president, Barack Obama, says the way the government runs in Washington needs to change. Speaking after a debt ceiling deal ended the government shutdown, Obama claims the Democrats and Republicans have a responsibility to American citizens to work together on issues they can agree on.

Obama: Washington ‘Has to Change’ After Shutdown and Debt Ceiling Crisis

Barack Obama used his weekly address on Saturday to repeat his appeal for greater co-operation between political parties in Washington DC, in the aftermath of the government shutdown and national debt crisis. The president also restated his claim that despite the Republican climbdown that cleared the way for a resolution of the crisis on Wednesday night, “no winners” had emerged from the political drama of the last two weeks.

Later in the day the former secretary of state Hillary Clinton, the presumed frontrunner for the 2016 Democratic presidential nomination, echoed Obama’s words in a speech delivered in support of Terry McAuliffe, the Democratic candidate for the governorship of Virginia. Clinton said the US people were looking for a return to “common sense and common ground” and would look to the Virginia race – McAuliffe faces the Republican Ken Cuccinelli – for a turn away from “divisive politics”.

It was Clinton’s first public campaign event since leaving the State Department in February, although she is also helping Bill de Blasio, a former aide, in his attempt to be elected mayor of New York.

On Thursday, Obama used remarks to the press to appeal for Republican co-operation over issues such as the federal budget, immigration reform and a farm bill. Discussions over the budget, involving the Republican representative Paul Ryan and the Democratic senator Patty Murray, have begun. However, optimism over bipartisan co-operation is in short supply.

On Saturday, in his address, Obama said: “There’s been a lot of discussion lately of the politics of this shutdown. But the truth is, there were no winners in this. At a time when our economy needs more growth and more jobs, the manufactured crises of these last few weeks actually harmed jobs and growth.

“The way business is done in Washington has to change. Now that these clouds of crisis and uncertainty have lifted, we need to focus on what the majority of Americans sent us here to do – grow the economy, create good jobs, strengthen the middle class, lay the foundation for broad-based prosperity, and get our fiscal house in order for the long haul.”

As the right has turned on itself, seeking to apportion blame for the almost complete failure of the conservative strategy of forcing the shutdown, key Republicans have expressed disappointment in Obama’s refusal to negotiate over the shutdown, which was provoked in an attempt to defund his signature healthcare reform, and scepticism about the prospects for co-operation in future. Mitch McConnell, the Senate minority leader who played a major part in securing Wednesday night’s deal, said in an interview “there is only one Democrat who really counts: the president”, adding: “He’s going to be there for three more years. Maybe he’ll have an epiphany.”

Representative Raúl Labrador, an influential Idaho conservative, on Wednesday indicated his extreme distrust of the president, saying: “I think what [Obama] has done over the past two and a half weeks – he’s trying to destroy the Republican party. I think that anything we do right now with this president on immigration will be with that same goal in mind, which is to destroy the Republican party and not to get good policies.”

Seemingly acknowledging such remarks, Obama continued: “It won’t be easy. But we can make progress. Specifically, there are three places where I believe that Democrats and Republicans can work together right away.

“First, we should sit down and pursue a balanced approach to a responsible budget, one that grows our economy faster and shrinks our long-term deficits further. There is no choice between growth and fiscal responsibility – we need both … this shouldn’t be as difficult as it has been in past years. Remember, our deficits are shrinking – not growing.

“Second, we should finish the job of fixing our broken immigration system. There’s already a broad coalition across America that’s behind this effort, from business leaders to faith leaders to law enforcement …Third, we should pass a farm bill.”

Saying that he did not expect Republicans to agree on everything “now that the cloud of crisis has passed”, Obama concluded: “We shouldn’t hold back on places where we do agree, just because we don’t think it’s good politics, or just because the extremes in our parties don’t like compromise.

“I’ll look for willing partners from either party to get important work done. There’s no good reason why we can’t govern responsibly, without lurching from manufactured crisis to manufactured crisis. Because that isn’t governing – it’s just hurting the people we were sent here to serve.”