By Kenneth Schortgen Jr, published on Examiner.com, on November 12, 2014 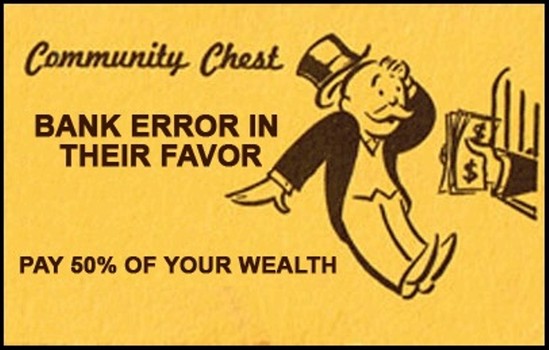 This weekend the G20 nations will convene in Brisbane, Australia to conclude a week of Asian festivities that began in Beijing for the developed countries and major economies. And on Sunday, the biggest deal of the week will be made as the G20 will formally announce new banking rules that are expected to send shock waves to anyone holding a checking, savings, or money market account in a financial institution.

On Nov. 16, the G20 will implement a new policy that makes bank deposits on par with paper investments, subjecting account holders to declines that one might experience from holding a stock or other security when the next financial banking crisis occurs. Additionally, all member nations of the G20 will immediately submit and pass legislation that will fulfill this program, creating a new paradigm where banks no longer recognize your deposits as money, but as liabilities and securitized capital owned and controlled by the bank or institution.

In essence, the Cyprus template of 2011 will be fully implemented in every major economy, and place bank depositors as the primary instrument of the next bailouts when the next crisis occurs.

On Sunday in Brisbane the G20 will announce that bank deposits are just part of commercial banks’ capital structure, and also that they are far from the most senior portion of that structure. With deposits then subjected to a decline in nominal value following a bank failure, it is self-evident that a bank deposit is no longer money in the way a banknote is. If a banknote cannot be subjected to a decline in nominal value, we need to ask whether banknotes can act as a superior store of value than bank deposits? If that is the case, will some investors prefer banknotes to bank deposits as a form of savings? Such a change in preference is known as a “bank run.”

Each country will introduce its own legislation to effect the ‘ bail-in’ agreed by the G20 this coming weekend.

Large deposits at banks are no longer money, as this legislation will formally push them down through the capital structure to a position of material capital risk in any “failing” institution. In our last financial crisis, deposits were de facto guaranteed by the state, but from November 16th holders of large-scale deposits will be, both de facto and de jure, just another creditor squabbling over their share of the assets of a failed bank. – Zerohedge

For most Americans with savings or checking accounts in federally insured banks, normal FDIC rules on deposit insurance are still in play, but anyone with over $250,000 in any one account, or held offshore, will have their money automatically subject to bankruptcy dispursements from the courts based on a much lower rank of priority, and a much lower percentage of return.

This also includes business accounts, money market accounts, and any depository investments such as a certificate of deposit (CD).

What makes this sudden push to securitize cash held as bank deposits is the pending question of whether the central banks or sovereign governments know that a crisis is forthcoming, especially in light of Europe’s rapid decline into recession, and Japan’s need to monetize their entire budget through central bank easing?

Just as people thought the ownership of gold and silver was inviolate prior to 1933 when the government ordered it confiscated to bailout the banks and Federal Reserve during the Great Depression, we are all now faced with the realization that the money we thought was our own, and protected in our checking and savings accounts no longer is. And after Sunday at the G20 meeting, the risks of holding any cash in a bank or financial institution will have to be weighed as heavily and with as much determination of risk as if you were holding a stock or municipal bond, which could decline in an instant should the financial environment bring a crisis even remotely similar to that of 2008.