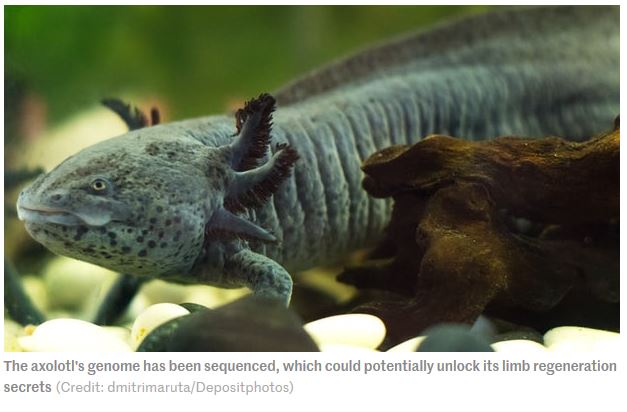 If you lose an arm or a leg, there’s a whole range of advanced prosthetics to give you some functionality back. But we might not need any artificial help in the long run if research into limb regeneration bears fruit. Scientists have now sequenced the genome of the Mexican axolotl, and have identified a few key genes hidden amongst its extremely complex genetic blueprint.

Ambystoma mexicanum is a type of salamander that doesn’t get too attached to its legs – and why should it? The creature can fully regrow lost limbs in a matter of weeks – bones, muscles, nerves and all. While humans can repair some minor tissue damage, or regrow hair and nails, the axolotl can recover from severe injuries to its spinal cord or retinas. It’s an enviable trait, and one that’s gathered plenty of attention over the years.

To help potentially unlock the axolotl’s regeneration secrets, an international team of scientists has now mapped the animal’s genome. And that was no easy feat: The axolotl genome contains a staggering 32 billion base pairs of DNA, meaning it’s more than 10 times bigger than that of humans and is currently the largest genome ever sequenced.

This enormous undertaking was completed using the PacBio platform, which can sequence more regions of the genome in each individual “read”. Since there’s far too much information in the entire genome, these tools divide the work up into smaller chunks at a time, called reads. Even though PacBio can perform longer reads than other systems, it still took more than 72 million reads, and other software can then stitch together the full genome from all these pieces.

On analysis of the genome, the researchers found several genes unique to axolotls and other amphibians that are expressed during regeneration. Interestingly, a gene called PAX3, which was previously considered vital to the development of an organism, was completely missing from the genome. Instead, the related gene PAX7 appears to have taken over those critical functions.

While we’re still a long way off being able to fully regrow missing arms and legs, sequencing the axolotl genome is a big step towards decoding how this ability can evolve and function. In the nearer future, the study may help us develop new ways to heal wounds faster to reduce recovery times and infection risks.

“We now have the map in our hands to investigate how complicated structures such as legs can be re-grown”, says Sergej Nowoshilow, co-first author of the study. “This is a turning point for the community of scientists working with axolotl, a real milestone in a research adventure that started more than 150 years ago.”

The research was published in the journal Nature.