At least 2,000 U.S. military veterans have arrived at Standing Rock amid frigid cold to help battle against the Dakota Access oil pipeline.

They are joining the months-long demonstration at a moment of heightened drama: The North Dakota governor has issued an emergency evacuation order for protesters around the site, which follows a U.S. Army Corps of Engineers deadline for demonstrators to leave the area by Monday, Dec. 5.

But protesters and their supporters have shown little inclination to back down. Donations to a GoFundMe account launched by Clark in support of Veterans for Standing Rock, a group he claims will “assemble as a peaceful, unarmed militia at the Standing Rock Indian Reservation,” have passed the $1 million dollar mark, coming from more than 24,000 individual donors, according to a page promoting the cause.

Standing Rock protesters have described the veterans’ mission as serving as a kind of “human shield” between peaceful demonstrators and police. 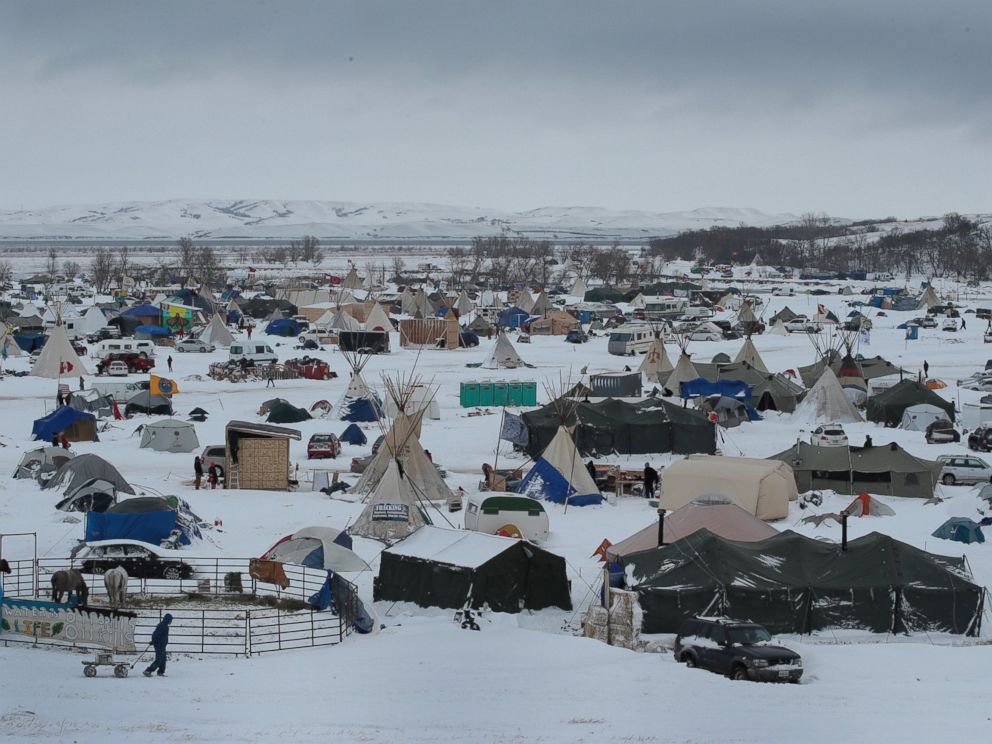 Clark posted an image to his Twitter account Dec. 1 with a photo of the American flag folded along his dashboard with a wintry Western sky in the background. Accompanying the image, Clark wrote: “We’re coming.”

Chicago native David Hulse, 34, a Navy veteran who served in Iraq told ABC News that he decided at the last minute to join the protests, describing his involvement as “not a mission of war, but a mission of peace.”

“Seeing so many veterans show up,” Hulse said. “Out here, it’s brotherhood.”

Hulse added that the goal of protecting Native American protesters at the site is “a frightening task,” but he said he hopes to serve as a witness.

Hulse said a 90-year-old man is among the veterans who have arrived at Standing Rock.

Among the veterans are some high-profile names, including U.S. Congresswoman Tulsi Gabbard, Democrat of Hawaii, who gained prominence when she left the Democratic National Committee to campaign for Sen. Bernie Sanders during his bid for the Democratic presidential nomination this year. Gabbard has frequently voiced support for the Dakota Access protest movement over social media. 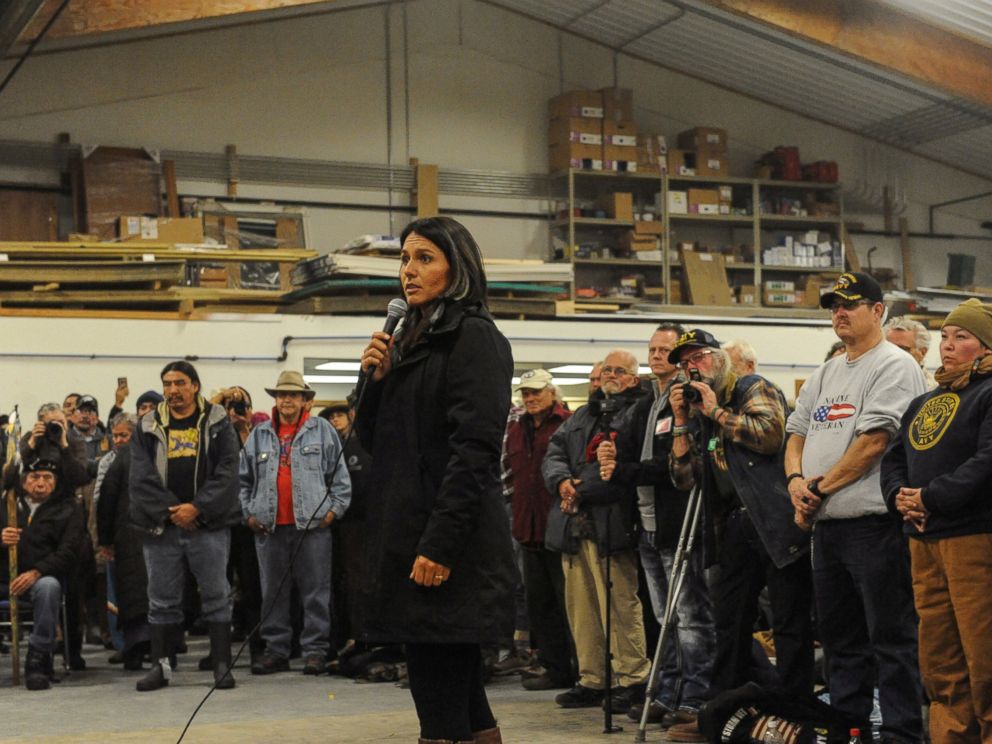 In addition to Clark’s “peaceful militia,” the U.S. Commission on Civil Rights told ABC News on Friday that it would send commissioners to North Dakota to monitor for any possible civil rights violations, as clashes between protesters and law enforcement have at times turned violent.

One protester Sophia Wilansky, 21, of New York was severely injured following a clash between demonstrators and law enforcement on Nov. 20. Her father, Wayne Wilansky, told The Associated Press last month that his daughter’s arm was seriously hurt when law enforcement threw a grenade in her vicinity. But the Morton County Sheriff’s Office said authorities did not use any concussion grenades and suggested that an explosion heard during the skirmish might have been caused by small propane tanks that authorities said protesters had rigged to explode, the AP reported.

A GoFundMe account seeking assistance for Wilansky’s medical treatment has brought in more than $417,000 to date.

Native American groups and environmental activists have been protesting since summer to block construction of the 1,172-mile pipeline that is slated to cut across four states and transport crude oil from North Dakota’s oil fields to refinery markets in Illinois. The activists, who call themselves “water protectors,” say that the pipeline traverses culturally sacred sites and poses a risk to the Standing Rock Sioux Tribe’s water supply.

In response to the state order, Standing Rock Sioux leader Dave Archambault II, called on the United Nations and President Obama to “take immediate action to prohibit North Dakota from engaging in its retaliatory actions and practices.” in response to the mandatory evacuation order issued for demonstrators by North Dakota Gov. Jack Dalrymple earlier this week.

“This week is the anniversary of the Sand Creek Massacre. It’s time for the United States to end its legacy of abuses against Native Americans,” Archambault said in a statement Thursday. “As a tribal nation, we call on the president to take all the appropriate steps to ensure water protectors are safe and that their rights to free speech and peaceful assembly are protected.”

Archambault said this weekend that he has accepted the governor’s invitation to meet about the pipeline but no date had yet been set, according to the Bismarck Tribune. 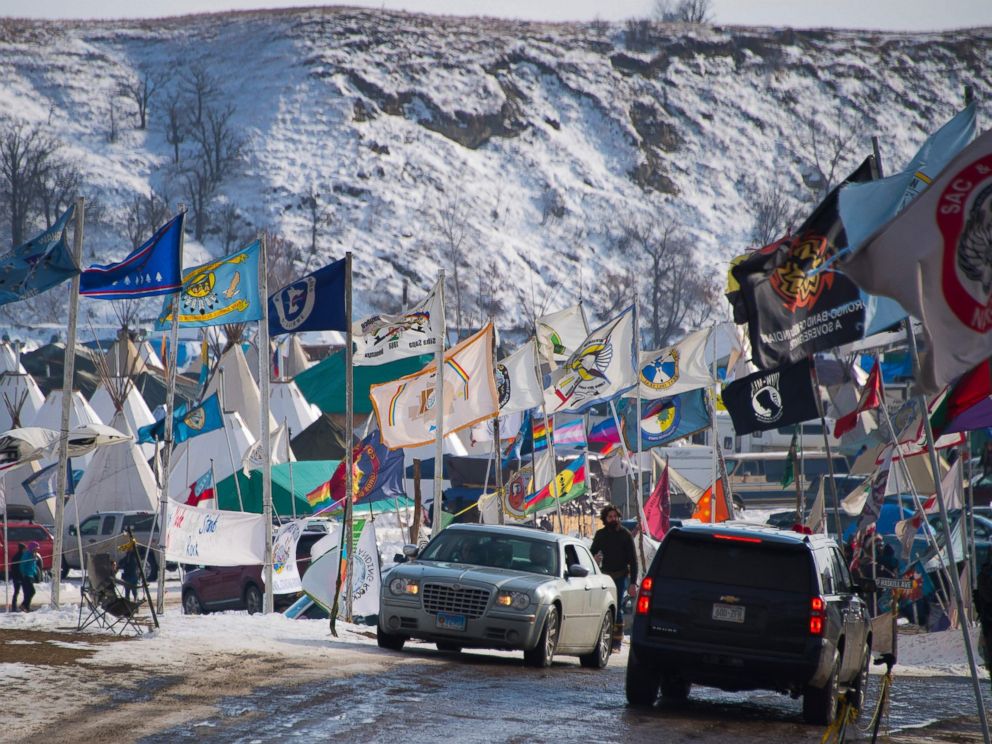 Kelcy Warren, CEO of Energy Transfer Partners, the Texas-based company behind the Dakota Pipeline, has argued that concerns about its potential to pollute water are unfounded.

She also wrote in an internal memo to staff in September that “multiple archaeological studies conducted with state historic preservation offices found no sacred items along the route,” suggesting that the construction of the pipeline would not affect Native Americans who live in the area where it is being built.