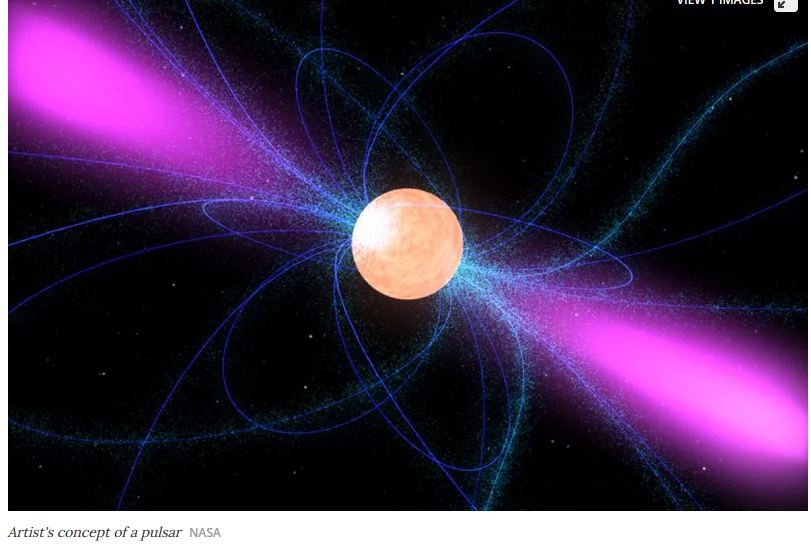 Astronomers have detected the strongest magnetic field ever observed in the universe. Studying powerful X-ray signals coming from a neutron star, the team calculated that its magnetic field is tens of millions of times stronger than any ever created in a lab here on Earth.
Designated GRO J1008-57, this neutron star belongs to a very specific subtype – an accreting X-ray pulsar. As a pulsar, it emits powerful beams of electromagnetic radiation that periodically sweep over the Earth like a lighthouse beam. The “accreting X-ray” description comes from the fact that material regularly falls onto its surface, causing periodic energetic X-ray outbursts that can be detected by telescopes.

And now, a team from the Chinese Academy of Sciences and Eberhard Karls University of Tübingen has studied one of these outbursts to calculate the strength of the pulsar’s magnetic field.

During an outburst in August 2017, the astronomers observed the pulsar using the Hard X-ray Modulation Telescope (Insight-HXMT). They noted a particular signature called a cyclotron resonant scattering feature (CRSF), a pattern that occurs when the X-ray photons scatter off plasma electrons at the surface.

This CRSF was measured at an energy of 90 keV, and from that the team calculated the magnetic field of the pulsar to be as high as one billion Tesla. That is far and away the most powerful magnetic field ever detected in the universe – for reference, the strongest magnetic field created in the lab so far is a “mere” 1,200 Tesla.

While this is the strongest that’s been directly detected, it’s theorized that even more intense versions of neutron stars, called magnetars, may have magnetic fields as strong as 100 billion Tesla.

The research was published in the Astrophysical Journal Letters.