Astrological Reflections: Auspicious Birth of the One People’s Public Trust 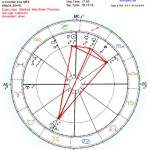 Auspicious Birth of the One People’s Public Trust: Astrological Reflections on Christmas Day, 2012

In mid-October, 2012, as I sat contemplating what lay ahead for humankind during those last couple of months of the year, spilling over into 2013, I was overwhelmed with a sense of awe and excitement. There is so much that could be said about that magical time from an astrological perspective, but the information I feel most compelled to share concerns the period from December 9, 2012, through January 9, 2013, with its crowning moment just before noon (Central Time Zone) on Christmas Day, 2012, the very day the One People’s Public Trust was officially launched into the world.

On December 9th something spectacular began to take shape in the heavens with profound implications for the collective evolutionary journey of our species: three of the slower moving, transpersonal planets, Saturn, Pluto and Jupiter, locked into an astonishing, month-long Finger of God formation within three degrees of arc. For those of you not familiar with the Finger of God, it involves a type of sacred geometry know as an isosceles triangle (in this case, with two 150 degree angles and one 60 degree angle).

I’ve heard this configuration likened to a jackhammer of intensely focused energy with its emphasis at the skinny end of the triangle, in the direction where God happens to be pointing. I’m not entirely satisfied with this metaphor, however. My sense is that it’s actually a birth canal of the Great Mother Goddess with its focus on the combined planetary energies being birthed. In this case, the powerhouses, Saturn and Pluto, were assigned the task of midwifing and enhancing the many blessings associated with Jupiter more fully into being.

There’s another aspect to the Finger of God that needs to be taken into account, however: something called the Activation Point. Not all such configurations have an Activation Point, but when one does, it’s much more likely that whatever is trying to be born will actually succeed in making its way down the birth canal and out into the world.

Think of the Activation Point as a cosmic trigger for the process of labor to begin. It involves a planet that locks into place exactly opposite (or 180 degrees away from) the end of the birth canal. Astonishingly, at the moment of sunrise on December 21, 2012, in Chichen Itza, Mexico, in fulfillment of Mayan Prophecy relative to this much-anticipated date, this is precisely what occurred. Venus, in its Morning Star aspect, slid into the necessary alignment with Saturn, Pluto and Jupiter (all of which were now exactly conjunct) and the birthing process began.

Extending this metaphor, the strenuous labor process continued until Christmas Day, when Venus finally moved out of its Activation Point position. What was ultimately born through the Great Mother Goddess into our earthly realm at that time was the highest possible expression of the combined planetary energies of Saturn (grounding, stability and karmic resolution), Pluto (deep transformation), Jupiter (spiritual blessings) and Venus (love).

When you add to this equation the fact that Pluto, at one corner of the Finger of God formation, was in Capricorn being squared by Uranus in Aries, exactly conjunct the Ascendant (representing lightning bolts of revolutionary inspiration), you have an over the top combination of planetary alignments, heralding a sustained period of non-violent, heart-centered revolution/evolution and spiritual liberation on a galactic scale.

Given this amazing astrological line-up, is it any wonder the One People’s Public Trust chose Christmas Day, 2012, to make its appearance on the global stage?

1 Comment to “ Astrological Reflections: Auspicious Birth of the One People’s Public Trust”