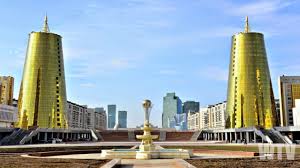 Astana The Future New World Order City Capital of Kazakhstan
For starters, there’s the ‘Palace of Peace and Reconciliation’: a vast pyramid structure near the heart of the city that contains an opera hall, the round table used for meetings of the Kazakh congress and at its apex, a glass-walled observation platform. The ‘Bayterek Tower’ meanwhile, is said to illustrate a Kazakh myth about a golden egg supported by the limbs of a magical tree. However, this giant golden orb could easily be mistaken for an image of the sun. As we all know, sun worship is closely associated with early pagan practices, and even within the Christian faith has connotations with Lucifer, the ‘Light Bringer’ or ‘Morning Star’.

11, 13 and 33 – The Illuminati / Freemason Signature
One of the major created things that pagans worship are Numbers. Occultists literally worship science and the mathematics underlying science. They literally believe that numbers possess inherent power, all their own. Listen to the explanation of one of history’s greatest Satanists, W. Wynn Wescott, who was extremely influential in the latter part of the 19th Century.

To reiterate: “… ‘Numbers are a key to the ancient views of cosmogony … spiritually as well as physically … to the evolution of the present human race; all systems of religious mysticism are based upon numerals. The sacredness of numbers …” [Ibid.]

The Satanist always places great power in numbers, especially the Black Magic Satanist. As we have stated in earlier articles, Daniel 8:23-25 tells us that the religion practiced by Antichrist is Black Magick; further, Revelation 17:17 tells us that the final 10 kings are of the same mindset and religion as Antichrist. Thus, we were not surprised that both Presidents Bush are Black Magic practitioners from the Skull & Bones Society, and that President Clinton was a practicing Black Magic Satanist.

Let us give you a few examples of when the Illuminati undergirded a key event using the occult signature of the number 11.

When the Illuminati ended the First World War, they had just successfully completed the first war of Albert Pike’s occult plan to produce Antichrist [Read NEWS1056]. Thus, they deliberately ended it on the 11th Month [November], the 11th Day, at the 11th hour. The signing of the Armistice agreement was thus undergirded by three elevens!

When the Illuminati assassinated President Kennedy, he was killed according to the occult number signature of eleven [11]. He was killed in the 11th month, on the 22nd day, and on the 33rd parallel. He was also killed in the Masonic Dealey Plaza, the most powerful secret society in the world today to whom the number 11 is extremely important. We shall revisit this subject later on, as we discuss the number ’33’ from a different angle.

The Number 11 was a most powerful occult signature underlying these events. When they were successfully carried out, occultists the world over knew exactly what had happened and who had carried it out, and for the purpose of setting the stage for “Number 11” himself, Antichrist.