published on The Amendment Center, on March 8, 2017 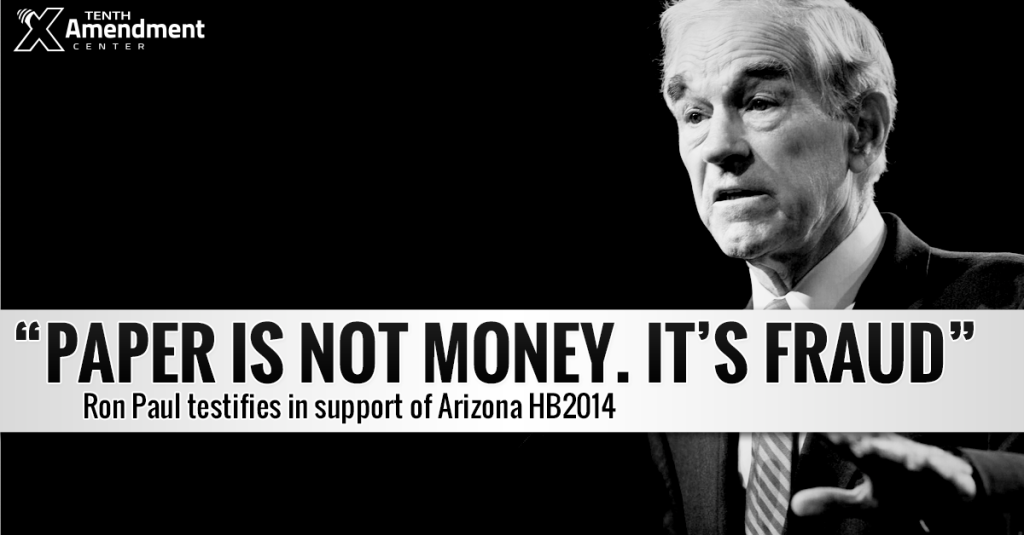 PHOENIX, Ariz. (Mar. 8, 2017) – Today, an Arizona Senate Committee passed a bill that would eliminate state capital gains taxes on gold and silver specie, and encourage its use as currency. Final approval of the legislation would help undermine the Federal Reserve’s monopoly on money.

Former US Rep. Ron Paul testified today in the Senate Finance Committee in support of House Bill 2014 (HB2014). The legislation, which previously passed the state House by a 35-24 vote, would eliminate state capital gains taxes on income “derived from the exchange of one kind of legal tender for another kind of legal tender.” The bill defines legal tender as “a medium of exchange, including specie, that is authorized by the United States Constitution or Congress for the payment of debts, public charges, taxes and dues.” “Specie” means coins having precious metal content.

In effect, passage of the bill would, as Paul noted, “legalize competition in a Constitutional fashion.”

Under current Arizona law, gold and silver are subject to capital gains tax when exchanged for Federal Reserve notes, or when used in barter transactions. If the purchasing power of the Federal Reserve note has decreased due to inflation, the metals’ nominal dollar value generally rises and that triggers a “gain.” In most cases, of course, the capital gain is purely fictional. But these “gains” are still taxed — thus unfairly punishing people using precious metals as money.

“We ought not to tax money, and that’s a good idea. It makes no sense to tax money,” said Paul. “Paper is not money, it’s a substitute for money and it’s fraud,” Paul continued, noting the importance of honesty money vs federal reserve notes.

Today, the Senate Finance Committee passed the bill by a 4-3 vote along party lines.

Passage of HB2014 would remove the amount of any net capital gain derived from the exchange of one kind of legal tender for another kind of legal tender or specie (gold and silver coins) from their gross income on their state income tax. In other words, individuals buying gold or silver bullion, or utilizing gold and silver in a transaction, would no longer be subject to state taxes on the exchange.

Bill sponsor Rep. Mark Finchem (R-Tucson) discussed this as well. “What the IRS has figured out at the federal level is to target inflation as a gain. They call it capital gains.” He noted that the bill would help Arizona residents “protect their conversion of one kind of currency for another.”

Passage into law would mark an important step towards currency competition. If sound money gains a foothold in the marketplace against Federal Reserve notes, the people would be able to choose the time-tested stability of gold and silver over the central bank’s rapidly-depreciating paper currency. The freedom of choice expanded by HB2014 would allow Arizona residents to secure the purchasing power of their money.

Ron Paul added that he considered the Arizona bill to be “very important” because it would also serve as an educational effort for other states. In fact, similar legislation is also under consideration in Idaho, Texas, Tennessee, Virginia, and Maine.

“The responsibility is on the states to follow the constitution,” said Paul.

Currently, all debts and taxes in Arizona must be paid with either Federal Reserve Notes (dollars), authorized as legal tender by Congress, or with coins issued by the U.S. Treasury — very few of which have gold or silver in them.

But the United States Constitution states in Article I, Section 10, “No State shall…make any Thing but gold and silver Coin a Tender in Payment of Debts.”

The Arizona bills take a step towards that constitutional requirement, ignored for decades in every state. Such a tactic would undermine the monopoly or the Federal Reserve by introducing competition into the monetary system.

Professor William Greene is an expert on constitutional tender and said when people in multiple states actually start using gold and silver instead of Federal Reserve Notes, it would effectively nullify the Federal Reserve and end the federal government’s monopoly on money.

Once things get to that point, Federal Reserve notes would become largely unwanted and irrelevant for ordinary people. Nullifying the Fed on a state by state level is what will get us there.