Are the oligarchs finally … removed..?

Are the oligarchs finally … removed..? 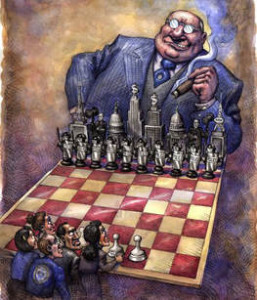 A modern term for a few ruling the many is Oligarchs. They can be seen in different forms. During the 1600 the most prominent was the East India Company, there were also similar companies set up by the Dutch, Austria, French, Sweden and Denmark.

The British East India Company had their backing from prominent families and the then superior British Military.

There has always been “rich” families pulling strings behind the scenes, they were often intertwined and linked to each other. The destruction of Monarchs in Europe and else were shifted the powers to “non” royal families. The Churches still had their powers though but there were taking the back seat this time. Why does not the Vatican distribute their wealth all over the planet and let us get free access to their library and vaults?

The USSR was destroyed from within by economic hitmen (like Leo Wanta that worked for Reagan) that actually created the modern oligarchs like Abramovitj and Khodorkovsky. The latter did some bad calls and ended up in jail along with other oligarchs during Putins cleansing.

There is actually only one man Putin who effectively has dealt with oligarchs over the last two decades one of the reasons why he is so heavily bashed from the Western world establishment. In the Western world the oligarchy is more hidden but it is very real just look at the high level corruption were just the  tip of the iceberg is shown in the Panama Papers leaks…

… as things sit today various countries are dealing with corruption but nobody is near as effective as Putins crew. MSB is at it in Saudi Arabia and Trump is at it in the U$A!

It is soo easy to point fingers at other countries about their corruption especially third world countries. It is done here in Sweden at a regular basis. BUT the corruption is very real here to but much more subtle. Politicians taking advantage of their position left right and center at different levels.

Yes off course there are good politicians also but given the circumstances the world is in today I would say that most political systems are broken!! Yanis Varoufakis (former FM of Greece) with his doings really showed how broken the EU along with institutions like IMF is. The EU was created with the context of preventing war in Europe. Really?! Who with their right minds would go to all out war today?

The greatest interventionists had their proxy wars Iraq twice, Afghanistan, Libya, Ukraine and now Syria. Look at the chaos left behind every time. I wrote about The Recent History of War a couple of years back which is still relevant if you feel inclined please read it again.

There is always somebody who profits from War and there is always suffering by the little people, the manufactured refugee crisis from the middle east and Syria just shows this all too well.

There is only one that officially has outed some of the oligarch players and that is Putin, he also has shown that knows what he is doing with the lawful Syrian intervention upon their request. Soros is banned in both Hungary and Russia I wonder why?

In Sweden we have our own oligarchs within the families of Bonnier, Wallenberg and Stenbeck…….. MSM wants us to join NATO!!?

Why do you think Snowden ended up in Russia?

I think Russia with Putin & Co has helped and are helping Trump indirectly to take down the oligarchy in the US in form of the Deep State. There are 10.000 sealed indictments in the US which has never happened before. The FBI probes against Hillary (election fraud, Uranium One deal, Bengazi and Clinton Foundation pay to play) are re-opened and the rats are starting to leave the ship. I think we are about to see the largest exposure linked to human trafficking, drug dealing and money laundering in human history.

We thought that we’ve seen corruption in the USSR in the past but I think the corruption in the U$A exceeds  the USSR by far!! There is a battle raging between white hats, grey hats and black hats. Due to a lot of bread crumbs via alleged whistle blower Q and MegaAnon the last couple of months it finally looks like things are speeding up…

… things are rarely as they seem which I think really applies to Trump. Just look at the hatred against him which is unprecedented. People are all up in arms for an alleged comment by him about Haiti being a s***hole then about the Clinton’s who actually created the s***hole in the first place! People are too lazy to actually do their own research so they just swallow everything MSM throws at them.

There is a really good way of doing research.. just follow the money and… you’ll get there! The oligarchs are going down which will be a shock for many when this hits the real news.

3 Comments to “ Are the oligarchs finally … removed..?”