Apple will attempt to frustrate tools used by Facebook to automatically track web users, within the next version of its iOS and Mac operating systems.

He added that the web browser Safari would ask owners’ permission before allowing the social network to monitor their activity.

The move is likely to add to tensions between the two companies.

At the WWDC conference – held in San Jose, California – Mr Federighi said that Facebook keeps watch over people in ways they might not be aware of.

“Well it turns out these can be used to track you, whether you click on them or not.”

He then pointed to an onscreen alert that asked: “Do you want to allow Facebook.com to use cookies and available data while browsing?” 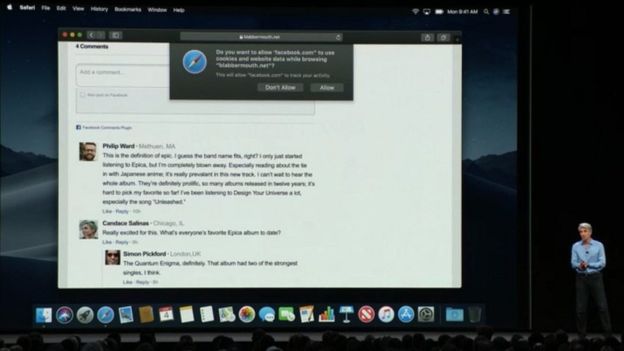 “You can decide to keep your information private.”

One cyber-security exert applauded the move.

“Apple is making changes to the core of how the browser works – surprisingly strong changes that should enable greater privacy,” said Kevin Beaumont.

“Quite often the changes companies make around privacy are small, incremental, they don’t shake the market up much.

“Here Apple is allowing users to see when tracking is enabled on a website – actually being able to visually see that with a prompt is breaking new ground.”

He added that the firm appeared willing to flash up a lot of prompts despite the potential for this to become annoying.

“Perhaps Apple is gambling on websites reining in tracking rather than users having to give constant permission to track their device,” he added.

Apple also said that MacOS Mojave would combat a technique called “fingerprinting”, in which advertisers try to track users who delete their cookies.

The method involves identifying computers by the fonts and plug-ins installed among other configuration details.

To counter this, Apple will present web pages with less details about the computer.

“As a result your Mac will look more like everyone else’s Mac, and it will be dramatically more difficult for data companies to uniquely identify your device,” Mr Federighi explained.

Apple’s attempts to block data tracking as you travel around the web could have a real impact on companies that rely on your personal information to make their billions.

Each demo showing these new tools used Facebook and Instagram – owned by Facebook – as the example of something you would want to block or at least restrict.

The question now is whether Facebook and other ad-tech companies will try to find new ways to trail our web activity, in an attempt to outsmart Apple.