We went on a bond-buying spree that was supposed to help Main Street. Instead, it was a feast for Wall Street. 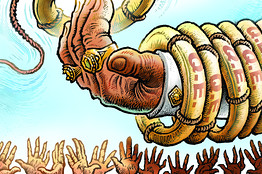 I can only say: I’m sorry, America. As a former Federal Reserve official, I was responsible for executing the centerpiece program of the Fed’s first plunge into the bond-buying experiment known as quantitative easing. The central bank continues to spin QE as a tool for helping Main Street. But I’ve come to recognize the program for what it really is: the greatest backdoor Wall Street bailout of all time.

Five years ago this month, on Black Friday, the Fed launched an unprecedented shopping spree. By that point in the financial crisis, Congress had already passed legislation, the Troubled Asset Relief Program, to halt the U.S. banking system’s free fall. Beyond Wall Street, though, the economic pain was still soaring. In the last three months of 2008 alone, almost two million Americans would lose their jobs.

The Fed said it wanted to help—through a new program of massive bond purchases. There were secondary goals, but Chairman Ben Bernanke made clear that the Fed’s central motivation was to “affect credit conditions for households and businesses”: to drive down the cost of credit so that more Americans hurting from the tanking economy could use it to weather the downturn. For this reason, he originally called the initiative “credit easing.”

My part of the story began a few months later. Having been at the Fed for seven years, until early 2008, I was working on Wall Street in spring 2009 when I got an unexpected phone call. Would I come back to work on the Fed’s trading floor? The job: managing what was at the heart of QE’s bond-buying spree—a wild attempt to buy $1.25 trillion in mortgage bonds in 12 months. Incredibly, the Fed was calling to ask if I wanted to quarterback the largest economic stimulus in U.S. history.

This was a dream job, but I hesitated. And it wasn’t just nervousness about taking on such responsibility. I had left the Fed out of frustration, having witnessed the institution deferring more and more to Wall Street. Independence is at the heart of any central bank’s credibility, and I had come to believe that the Fed’s independence was eroding. Senior Fed officials, though, were publicly acknowledging mistakes and several of those officials emphasized to me how committed they were to a major Wall Street revamp. I could also see that they desperately needed reinforcements. I took a leap of faith.

In its almost 100-year history, the Fed had never bought one mortgage bond. Now my program was buying so many each day through active, unscripted trading that we constantly risked driving bond prices too high and crashing global confidence in key financial markets. We were working feverishly to preserve the impression that the Fed knew what it was doing.

It wasn’t long before my old doubts resurfaced. Despite the Fed’s rhetoric, my program wasn’t helping to make credit any more accessible for the average American. The banks were only issuing fewer and fewer loans. More insidiously, whatever credit they were extending wasn’t getting much cheaper. QE may have been driving down the wholesale cost for banks to make loans, but Wall Street was pocketing most of the extra cash.

From the trenches, several other Fed managers also began voicing the concern that QE wasn’t working as planned. Our warnings fell on deaf ears. In the past, Fed leaders—even if they ultimately erred—would have worried obsessively about the costs versus the benefits of any major initiative. Now the only obsession seemed to be with the newest survey of financial-market expectations or the latest in-person feedback from Wall Street’s leading bankers and hedge-fund managers. Sorry, U.S. taxpayer.

Trading for the first round of QE ended on March 31, 2010. The final results confirmed that, while there had been only trivial relief for Main Street, the U.S. central bank’s bond purchases had been an absolute coup for Wall Street. The banks hadn’t just benefited from the lower cost of making loans. They’d also enjoyed huge capital gains on the rising values of their securities holdings and fat commissions from brokering most of the Fed’s QE transactions. Wall Street had experienced its most profitable year ever in 2009, and 2010 was starting off in much the same way.

You’d think the Fed would have finally stopped to question the wisdom of QE. Think again. Only a few months later—after a 14% drop in the U.S. stock market and renewed weakening in the banking sector—the Fed announced a new round of bond buying: QE2. Germany’s finance minister, Wolfgang Schäuble, immediately called the decision “clueless.”

That was when I realized the Fed had lost any remaining ability to think independently from Wall Street. Demoralized, I returned to the private sector.

Where are we today? The Fed keeps buying roughly $85 billion in bonds a month, chronically delaying so much as a minor QE taper. Over five years, its bond purchases have come to more than $4 trillion. Amazingly, in a supposedly free-market nation, QE has become the largest financial-markets intervention by any government in world history.

And the impact? Even by the Fed’s sunniest calculations, aggressive QE over five years has generated only a few percentage points of U.S. growth. By contrast, experts outside the Fed, such as Mohammed El Erian at the Pimco investment firm, suggest that the Fed may have created and spent over $4 trillion for a total return of as little as 0.25% of GDP (i.e., a mere $40 billion bump in U.S. economic output). Both of those estimates indicate that QE isn’t really working.

Unless you’re Wall Street. Having racked up hundreds of billions of dollars in opaque Fed subsidies, U.S. banks have seen their collective stock price triple since March 2009. The biggest ones have only become more of a cartel: 0.2% of them now control more than 70% of the U.S. bank assets.

As for the rest of America, good luck. Because QE was relentlessly pumping money into the financial markets during the past five years, it killed the urgency for Washington to confront a real crisis: that of a structurally unsound U.S. economy. Yes, those financial markets have rallied spectacularly, breathing much-needed life back into 401(k)s, but for how long? Experts like Larry Fink at the BlackRock investment firm are suggesting that conditions are again “bubble-like.” Meanwhile, the country remains overly dependent on Wall Street to drive economic growth.

Even when acknowledging QE’s shortcomings, Chairman Bernanke argues that some action by the Fed is better than none (a position that his likely successor, Fed Vice Chairwoman Janet Yellen, also embraces). The implication is that the Fed is dutifully compensating for the rest of Washington’s dysfunction. But the Fed is at the center of that dysfunction. Case in point: It has allowed QE to become Wall Street’s new “too big to fail” policy.