Ancient Sumerian Artifacts Discovered In The Jungles Of Ecuador

Ancient Sumerian Artifacts Discovered In The Jungles Of Ecuador 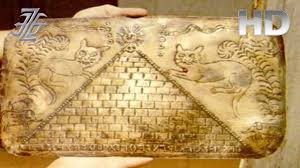 This is a mysterious an account of a priest in Ecuador involving claims of unknown civilizations, strange golden artifacts, a subterranean cave system containing a metallic library, depictions of strange figures connecting America to Sumeria, symbols depicting an unknown language, evidence of extra-terrestrial contact, and a Vatican conspiracy involving thousands of missing ancient artifacts.

The indigenous people gave Father Crespi gifts of ancient artifacts to thank him for the work he was doing to help them. They said the items brought to him had been found in subterranean tunnels in the jungles of Ecuador, spanning more than 200 km starting from the village of Cuenca. The amazing artifacts given to him had uncanny similarities with civilizations of the East, and were enough to fill up a large museum.