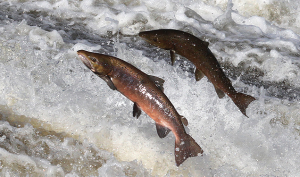 (Natural News) The Canadian archipelago of Haida Gwaii is returning traditional Haida food to their two major hospitals. A Hakai Magazine article states that the move is part of a nationwide effort to improve food practices and policies in Canada’s hospitals.

Found off the northwestern coast of British Columbia, Haida Gwaii is the ancestral homeland of the Haida Nation. To this day, the residents of the sparsely populated islands catch fish from the Pacific Ocean and collect food from the land.

The Haida people collect butter clams, razor clams, salmon, and seaweed from the abundant waters. The forests provide them with blueberries, huckleberries, and thimbleberries that the women gather by hand.

Over the centuries, the native Canadians came up with clever ways to obtain, prepare, and preserve wild foods. Despite efforts at suppression by British and Canadian authorities, the Haida kept many of these traditions alive by fishing and foraging in the traditional manner.

Jenny Cross and her fellow Haida believe that traditional food goes beyond mere sustenance. They serve as medicine for the soul. (Related: Communities that restrict trans fats in their food have fewer residents admitted to hospital for heart attack and stroke.)

This “medicinal” food appeared in the Queen Charlotte/Haida Gwaii General Hospital in Queen Charlotte City during the early 1970s. Cross recalled fishermen bringing their newest catch to the hospital.

The practice of freshly caught foods didn’t last. In the latter half of the 1970s, the Queen Charlotte hospital and the Northern Haida Gwaii Hospital and Health Centre in Masset removed traditional Haida food from their menus. Patients have been making do with either reheated frozen food or meals made from ingredients from the Canadian mainland.

The impersonal and unfamiliar grocery store foods add to the loneliness of Haida elders who have to visit either of the two hospitals. Thankfully, this four-decade long practice of feeding frozen food to patients will be ending at last.

June 21, 2018 marks the day when traditional Haida food returns to the local healthcare system. The Haida Gwaii General Hospital will start spending one percent of its monthly food budget on berries, vegetables, venison, and other foods.

The hospital will get these ingredients from local farmers and foragers. Fresh halibut and salmon will be donated by Haida Wild, a fish processing plant that is owned and run by the Haida Nation.

Canada is improving hospital food across the nation

The project is organized by people like dietitian Shelly Crack. She explains that Haida Gwaii’s hospitals will go back to serving traditional foods that are cooked in-house.

Crack’s team and an environmental health officer have come up with a number of food safety plans. They will record the identity of the local farmer or forager, as well as the time the food was obtained.

The Haida Gwaii General Hospital will process the ingredients in a food-safe kitchen before freezing them. Each supply will receive a batch number for tracking purposes. Crack assures that this method will work for all traditional foods.

Meanwhile, the Northern Haida Gwaii Hospital and Health Centre plans to switch from reheated food to freshly prepared meals. Patients and hospital staff will enjoy a traditional Haida meal once every month.

The dietary change is not limited to Haida Gwaii. It falls under the banner of Nourish, a Canadian effort to bring healthier food to hospitals nationwide.

Jenny Cross is sure that hospital patients will take to their new meals. She describes traditional Haida food as food for the soul.

“You say mmm when you eat from the ocean, because it nourishes and feeds your spirit,” she says. “It makes you stronger.”

You can find more stories about natural foods at Organics.news.