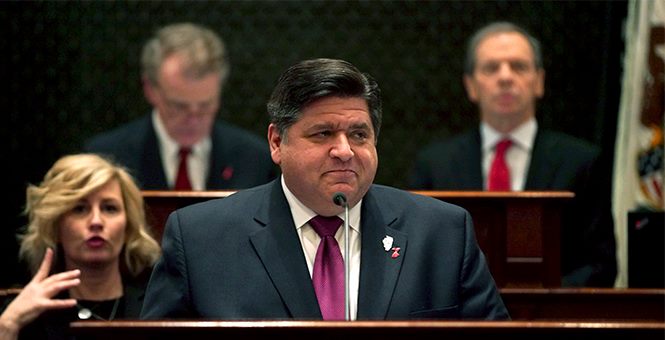 Lost in the shuffle of the Memorial Day holiday weekend — unusual, though it was — an Illinois judge unloaded on Governor J.B. Pritzker’s still-in-effect stay-at-home order this past Friday. I’ve written previously regarding the significant distinction between Chicago — and even Springfield — and “outstate” or “downstate” Illinois. This judge’s decision further highlights that great divide.

The back story: State Rep. Darren Bailey, a Republican from the state’s 109th District, filed a lawsuit against Pritzker in April, asserting that Pritzker’s stay-at-home order unfairly affected the residents of his home county. Clay County Judge Michael McHaney issued a temporary restraining order in that matter, but only as to Bailey himself, opining that Bailey “has a clearly ascertainable right in need of immediate protection, namely his liberty interest to be free from Pritzker’s executive order of quarantine in his own home.” Pritzker subsequently removed the case to federal court (Southern District of Illinois) and now, the U.S. DOJ has intervened in that matter, supporting both the challenge to the orders themselves and the removal of the case to federal court.

Following Bailey’s challenge, James Mainer, an Operation Iraqi Freedom veteran and small business owner in Clay City, filed a similar suit in Clay County. Judge McHaney issued his ruling in that matter this past Friday and, although he again limited the scope of the restraining order to the individual plaintiff, he had some choice words for the Governor and his stay-at-home order (after first admonishing those in the courtroom to avoid public outbursts):

Since the inception of this insanity, the following regulations, rules or consequences have occurred: I won’t get COVID if I get an abortion but I will get COVID if I get a colonoscopy. Selling pot is essential but selling goods and services at a family-owned business is not. Pot wasn’t even legal and pot dispensaries didn’t even exist in this state until five months ago and, in that five months, they have become essential but a family-owned business in existence for five generations is not.

A family of six can pile in their car and drive to Carlyle Lake without contracting COVID but, if they all get in the same boat, they will. We are told that kids rarely contract the virus and sunlight kills it, but summer youth programs, sports programs are cancelled. Four people can drive to the golf course and not get COVID but, if they play in a foursome, they will. If I go to Walmart, I won’t get COVID but, if I go to church, I will. Murderers are released from custody while small business owners are threatened with arrest if they have the audacity to attempt to feed their families.

Our economy is shut down because of a flu virus with a 98 percent plus survival rate. Doctors and experts say different things weekly. The defendant cites models in his opposition. The only thing experts will agree on is that all models are wrong and some are useful. The Centers for Disease Control now says the virus is not easily spread on surfaces.

The defendant in this case orders you to stay home and pronounces that, if you leave the state, you are putting people in danger, but his family members traveled to Florida and Wisconsin because he deems such travel essential. One initial rationale why the rules don’t apply to him is that his family farm had animals that needed fed. Try selling that argument to farmers who have had to slaughter their herds because of disruption in the supply chain.

But the best part of McHaney’s ruling follows:

When laws do not apply to those who make them, people are not being governed, they are being ruled. Make no mistake, these executive orders are not laws. They are royal decrees. Illinois citizens are not being governed, they are being ruled. The last time I checked Illinois citizens are also Americans and Americans don’t get ruled. The last time a monarch tried to rule Americans, a shot was fired that was heard around the world. That day led to the birth of a nation consensually governed based upon a document which ensures that on this day in this, any American courtroom tyrannical despotism will always lose and liberty, freedom and the constitution will always win.

That there’s what they call a mic drop moment. The full order can be read here.


Pritzker, of course, dismissed the ruling as borne of a political agenda. Liberty, freedom, the constitution…terrible political agendas, those! (I suppose politics are only allowed to work in one direction in the Land of Lincoln?)

Meanwhile, the citizens of Illinois are becoming increasingly impatient with their Governor. In fact, rumor has it there’s a recall petition in the works.

Keep an eye on Illinois, folks. There look to be some interesting showdowns up ahead.