A number of ordinary Americans this week have declared that they are “not a Russian bot” amid a smear campaign to cast the #WalkAway movement as an attempt from “Russian bots” to influence the 2018 midterm elections.

The #WalkAway movement, which saw Democrats posting videos saying they will “walk away” from the party, gained traction when Brandon Straka, who is its founder, posted a viral video. “Once upon a time, I was a liberal. Well, to be honest, less than a year ago, I was still a liberal,” he said in the video. “I reject a system which allows an ambitious, misinformed and dogmatic mob to suppress free speech, create false narratives, and apathetically steamroll over the truth.”

But after its popularity, a new narrative emerged: #WalkAway is now a Russian operation despite the numerous videos and photos uploaded online, accompanied by personal statements from people who say they reject the Democratic Party.

A CNN opinion article claimed that Russia is using a “strategy” to promote the “#WalkAway hashtag.” The article says: “However, #WalkAway has also now been connected to Kremlin-linked Russian bots, and it is now the seventh most popular Russia-influenced hashtag as of this writing,” claiming that it’s propaganda and a “psychological operation.” The article attempts to cast the movement as anything but a grassroots one.

A Facebook group linked to the movement says it’s “a true grassroots movement” and “dedicated to sharing the stories of people who can no longer accept the current ideology of liberalism and what the Democratic Party has become. Some left long ago.”

But, “many of us,” it adds, “have recently been ‘red-pilled.’” In the movie “Matrix,” the red pill gives one the possibility of looking at reality as it is, not at a synthetic reality.

The CNN article, meanwhile, does not include any quotes, videos, or photos of the ordinary Americans who have “walked away” from the party, and it doesn’t make any mention of Straka or other prominent figures who have advocated for the movement.

In the #WalkAway Campaign Facebook group, a number of people refuted the “Russian bot” claim, posting photos or videos themselves.

“Native American tribal elder from Michigan. I walked away because I choose the kind road. I’m First Nation and positive I’m not a Russian bot. Lol. Blessings. Alicejo Shagikwe,” wrote one woman in the Facebook group.

A Facebook screenshot shows a woman who “walked away” saying she’s not a Russian bot. (Facebook/screenshot)

“I am so grateful to the founders of this #WalkAway Campaign, and all of the people who dared to come in here and share their reason and logic that prompted them to walkaway from the Democratic party. Many of the posts I see in here bravely highlight experiences about racism and bigotry in the Democratic party,” Ted Jotte wrote in the group, holding a sign: “Hey libs and all of you media propagandists. I am not a Russian bot.”

“I’ve been reading posts for at least a couple of days now – I guess I am supposed to tell you all that I am NOT a Russian ‘Bot’ (whatever that is),” wrote another man in the Facebook group. 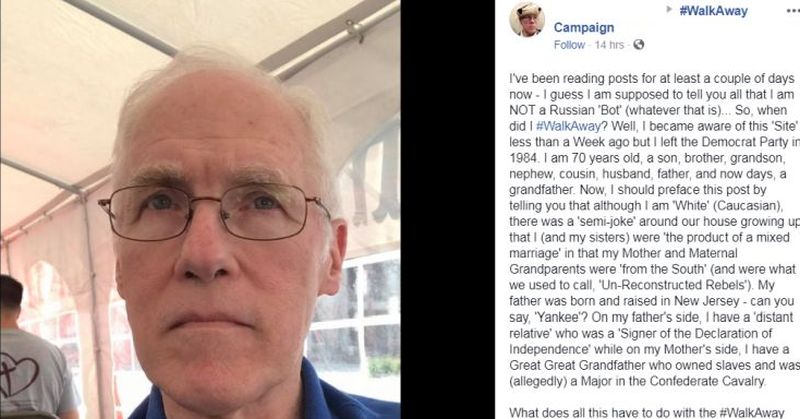 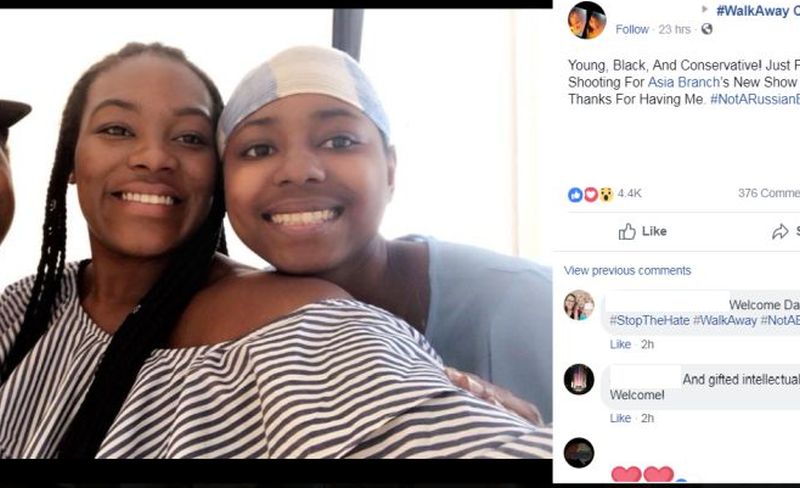 Added a woman to the page: “Young, Black, And Conservative! Just Finished Shooting For Asia Branch’s New Show #SpeakOnIt. Thanks For Having Me. #NotARussianBot.” 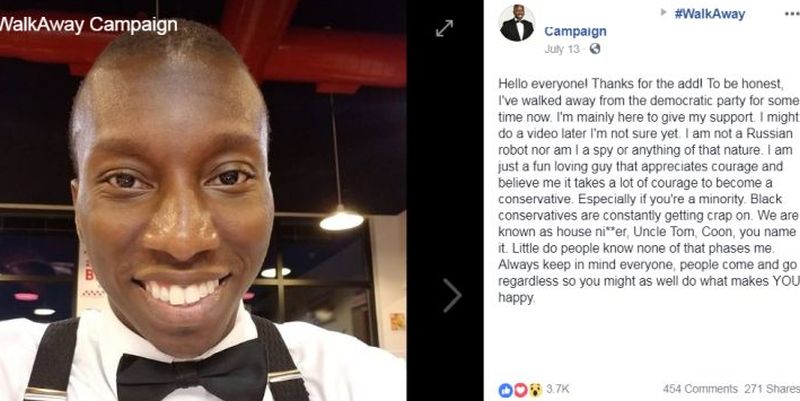 Said another man: “To be honest, I’ve walked away from the democratic party for some time now. I’m mainly here to give my support. I might do a video later I’m not sure yet.”

“I am not a Russian robot nor am I a spy or anything of that nature. I am just a fun loving guy that appreciates courage and believe me it takes a lot of courage to become a conservative. Especially if you’re a minority. Black conservatives are constantly getting crap[ped] on. We are known as house [n-word], Uncle Tom, Coon, you name it. Little do people know none of that phases me. Always keep in mind everyone, people come and go regardless so you might as well do what makes YOU happy.”

Another woman held a sign saying she’s “not a Nazi” and “not a bot.” 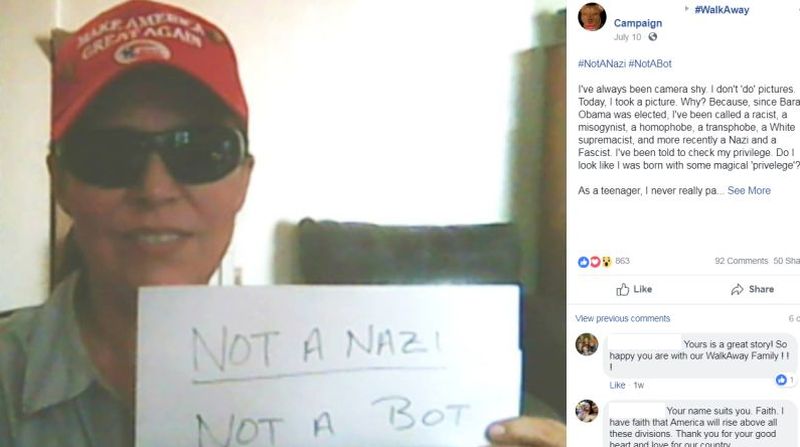 The Epoch Times has reached out to the moderator of the Official Walk Away Campaign for a comment.