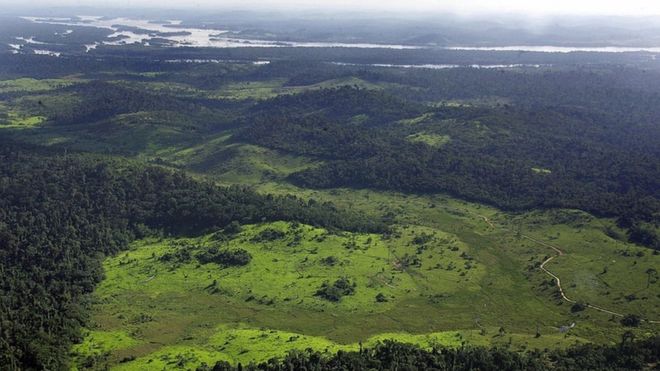 Indigenous peoples who inhabited the Amazon before the arrival of European colonisers planted a vast number of trees, a new study argues.

They played an important role in the current composition of the forest, says the study.

“So the Amazon is not nearly as untouched as it may seem,” said Dr Hans ter Steege in the Netherlands.

The scientists reached their conclusions by comparing data on tree composition from more than 1,000 locations in the Amazon with a map of archaeological sites.

In an earlier study, published in 2013, a team led by Dr ter Steege, from the Naturalis Biodiversity Center in Leiden, concluded that a limited number of trees was dominant in the Amazon.

Half of the trees in the forest belong to just 227 species, according to their research.

An estimated eight to 10 million people lived in the Amazon region before the arrival of Christopher Columbus in 1492, which marked the beginning of European colonisation.

Millions of indigenous people died either in clashes with the Europeans or infected by infectious diseases for which their bodies had no defence, such as smallpox.

But the researches said the ancient peoples of the Amazon left their mark in the forest.

“Past civilizations have had a great role in changing, both consciously and unconsciously, the vegetation in the surroundings of their settlements and along paths that they used to travel,” said study researcher Carolina Levis, from Brazil’s National Institute for Amazonian Research and the Wageningen University and Research Center in the Netherlands.

The research was published in the American journal, Science.