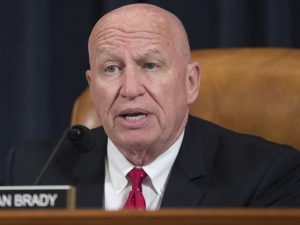 This time next year, Americans will file under a new, modern tax code that catapults our nation’s competitiveness forward.

On Tuesday, April 17, we Americans file our taxes — for the last time — under the old, broken tax code. Yes, for the last time. Goodbye and good riddance to that outdated, monstrosity of a tax code that took too much of your money, sent our American jobs overseas, and kept our economy so slow many workers didn’t see a pay raise for a decade or more.

Going forward, Americans should all take comfort knowing that this time next year they’ll file under the new, modern tax code that lowers taxes for families and local businesses — and leapfrogs America to the lead pack among the world’s tax codes.

This means that starting now, individuals and married couples will keep more of their hard-earned money and take home a bigger paycheck. That comes in the form of lower tax rates across the board and a standard deduction that has been nearly doubled. For instance, a typical family of four earning the median annual income of $73,000 will see a total tax cut of $2,059. And for a newlywed couple earning $61,000 or less, they won’t pay a cent in federal income tax.

In addition, families will be able to keep more of their money with a child tax credit that will double from $1,000 to $2,000 for each child when they file in 2019. That’s money that most families really need.

With the new code, we’re also already seeing more jobs, larger paychecks and new investments in the USA — but the best is yet to come. That’s because the new code no longer runs roughshod over hardworking families or Main Street businesses, but instead embodies the principle that Americans know how to spend their own money better than a bureaucrat sitting in a Washington office. Tax reform has laid the foundation for a new era of American prosperity.

It’s now undeniable that tax reform is boosting the economy, and that American families are already benefiting. More than 400 companies — and counting — have announced pay raises, bonuses and investments in their workers and businesses. More than 4 million Americans are seeing pay raises and new benefits. Wages are growing and unemployment is low — with U.S. jobless claims at their lowest level since 1973.

Thanks to tax reform, we now have lower tax rates for local businesses — including a first-ever small business deduction to protect 20% of their income from taxes.

This means small businesses, where almost half of America’s private-sector workforce is employed, will have more money to invest, hire and grow in their community. It should come as no surprise that small business optimism is now at the highest level since 1983.

POLICING THE USA: A look at race, justice, media

But don’t just take my word for it: Earlier this month, employees at Southwest Airlines shared their stories about how they’re using their tax reform bonuses to make some much-needed purchases. One woman told me that she is paying off her condo, while another bought a new washer and dryer, which she joked was badly needed with two teenage boys. With two teenage boys of my own, I can certainly commiserate on that.

With more financial freedom, families will be able to take that beach vacation or put extra money towards their mortgage. But whatever they decide to do with their tax break, it is their choice, not the government’s. Empowering families to run their own lives is at the heart of our national identity and the key to our success.

Thanks to tax reform, parents have hope that they’ll be able to afford a good education or vocational training for their kids, and that those kids will have better opportunities than their parents did when they left school. Isn’t that the American Dream, after all?

So while we are in the midst of this year’s frustrating tax season, filing under the old, broken tax code, things look bright for next year. That’s because we now have a new tax code that puts families first and allows for a true revival of American innovation, dynamism and economic growth.

Kevin Brady is a Republican representative for Texas and chair of the House Ways and Means Committee. Follow him on Twitter: @RepKevinBrady