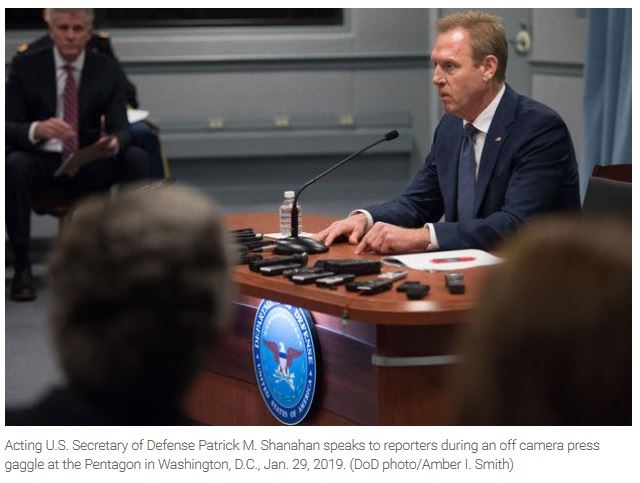 The Defense Department has been asked to put up more concertina wire and conduct expanded surveillance along the U.S.-Mexico border, which will likely require “several thousand” more troops to be deployed, the Pentagon’s acting leader said Tuesday.

Should President Donald Trump declare a national emergency at the border, as he has threatened to do, the Pentagon has prepared recommendations on how it could support the response, including how best to use military construction funding, according to Acting Defense Secretary Patrick Shanahan.

He said that a larger troop presence at the border is likely. The Department of Homeland Security recently asked the Pentagon for additional support for the mission, which already calls for service members to be deployed through September.

There are approximately 4,500 active-duty and National Guard forces currently stationed at the border, down from about 5,900 in November.

“It’s really around this mission of monitoring, surveilling and detection,” Shanahan told reporters during an off-camera briefing at the Pentagon on Tuesday.

Shanahan did not say how additional funding could be allocated through the Pentagon’s budget, nor if assigned funding for the mission would be diverted to building the border wall. He said there is authority to utilize military construction funds for the wall.

If an emergency is declared, he said the government could leverage 10 U.S. Code § 2808, which provides “construction authority in the event of a declaration of war or national emergency.”

“Within that, there is language that says … to enhance the capability of the military construction funds [and that] they can be utilized,” Shanahan said, adding however, “The money that we have assigned for military construction was appropriate[d] for specific tasks, so those have already been allocated and assigned to certain missions.”

He did not specify who would build the wall, as troops are meant to remain in a support-only role.

Shanahan’s comments came as Rep. Adam Smith, D-Wash., chairman of the House Armed Services Committee, is holding a hearing with John Rood, under secretary of defense for policy, and Navy Vice Adm. Michael Gilday, director of operations on the Joint Staff.

Lawmakers want to know whether the use of active-duty troops for the border mission is necessary, Shanahan said. “What [Smith has] been asking is, ‘Help us understand the policy.’ ”

Shanahan said he has had many conversations on border security with Smith, whose aim is to ensure transparency on the military’s mission there.

“When we look at the role, it is a support role [including medical and logistical support], so it’s not about undertaking a law enforcement position,” Shanahan said.

In December, the Pentagon extended the original border deployment at the request of DHS.

“In response to the December 27, 2018, request from the Department of Homeland Security (DHS), Acting Secretary of Defense Pat Shanahan approved Department of Defense assistance to DHS through Sept. 30, 2019,” the Pentagon said in a statement at the time. “DoD is transitioning its support at the southwestern border from hardening ports of entry to mobile surveillance and detection, as well as concertina wire emplacement between ports of entry. DoD will continue to provide aviation support.”