Absolute Data: The Security Council voted unanimously to exit Iraq from Chapter VII and entry to Section VI of the UN Charter 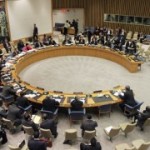 Chapter VII allows the Security Council to authorize actions ranging from sanctions to military intervention if states do not abide by council demands, while Chapter VI urges countries to peacefully resolve any conflicts.

The council unanimously agreed that the issue of missing Kuwaiti people, property and archives should be dealt with under Chapter VI; the only issues linked to Iraq’s invasion of Kuwait that remain under Chapter VII are an arms embargo and Baghdad’s outstanding reparations of $11 billion, which it expects to pay by 2015.

The move by the council is a significant political boost for Baghdad as it struggles to restore its international standing.

The Security Council resolution recognized the importance of Iraq achieving international standing equal to that which it held prior to its invasion of Kuwait in 1990.

Reuters says there are still a range of Chapter VII issues imposed on Baghdad after Saddam’s ouster in 2003, including the freeze and return of Saddam-era assets and trade ban on stolen Iraqi cultural property.

3 Comments to “ Absolute Data: The Security Council voted unanimously to exit Iraq from Chapter VII and entry to Section VI of the UN Charter”

Leave a Reply to I M Power Cancel reply