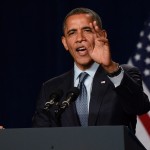 US President Barack Obama speaks at the Fox Theatre in Redwood City, California, on May 23, 2012.

By Gordon Duff and Press TV

It’s a shame that no American president can speak openly without “wrapping” their words in hyperbole. Thus, Obama’s key speech, making startling admissions of American wrongdoing and mistakes, will be misunderstood and mischaracterized, either because it was incomprehensibly written or purposefully misconstrued.

One key failure of the Obama administration has been his failure to close the illegal detention facility at Guantanamo, Cuba.

However, his statement below and other key areas of his May 23, 2013 policy address may well indicate, not just a final fulfillment of that promise but a beginning to redress some of America’s behaviors that have led to so much suffering.

In order to hold someone to account, it is necessary to actually know what has been said. Toward that end, we will look at what President Obama has promised. We will also examine those critical areas that represent a real policy change and, either give credit where credit is due, or if these initiatives are not followed up on, have a rational basis for criticism.

“So we bring law of war detention to an end, and we are committed to prosecuting terrorists whenever we can.

The glaring exception to this time-tested approach is the detention center at Guantanamo Bay. The original premise for opening GTMO – that detainees would not be able to challenge their detention – was found unconstitutional five years ago. In the meantime, GTMO has become a symbol around the world for an America that flouts the rule of law. Our allies won’t cooperate with us if they think a terrorist will end up at GTMO…

These restrictions make no sense. After all, under President Bush, some 530 detainees were transferred from GTMO with Congress’s support… there is no justification beyond politics for Congress to prevent us from closing a facility that should never have been opened.

Today, I once again call on Congress to lift the restrictions on detainee transfers from GTMO.

Even after we take these steps, one issue will remain: how to deal with those GTMO detainees who we know have participated in dangerous plots or attacks, but who cannot be prosecuted – for example because the evidence against them has been compromised or is inadmissible in a court of law. But once we commit to a process of closing GTMO, I am confident that this legacy problem can be resolved, consistent with our commitment to the rule of law.”

As there have been no denials as to the accuracy of key aspects of the statement above, congress, long cited as “in thrall” to the AIPAC lobby, is exposed for its active and continuing role in constitutional abuses.

The media, though airing a speech few listened to, purposefully and systematically chose to censor and edit what was actually said.

Were they to have done their job in a manner consistent with free speech and journalistic ethics, the following points would have been paramount:

• President Obama admitted that the United States had backed groups in Syria that are terrorist led and that he believes, if that aid continues, would lead Syria to a period of sectarian slaughter. He didn’t vow to end aid to rebels but admitted that rebel military groups are both extremist and radicalized and represent a danger to the world.

• President Obama clearly stated that the United States and engaged in torture in direct violation of international law. No attempt was made to justify American acts nor was any attempt made to describe “waterboarding” as other than torture or attempt to mischaracterize America’s illegal acts as limited to waterboarding only. No promise was made, we note, to turn those who took part in such acts or authorized their use, over to the International Criminal Court at The Hague, as is required.

• President Obama clearly pointed out that America’s rendition program is illegal; that military tribunals are a violation of both US law and international convention and that the United States has been operating outside the law continually.

• Many who listened to Obama’s speech believed drone strikes were being defended. This is far from the case. What we did learn is that the American congress has been briefed and has been fully complicit in all drone strikes other than those inside Iraq and Afghanistan, which are done under direct military command. We did learn that President Obama sees drone strikes as an element of radicalization. What was there to be heard, were one to wade through misdirection and obfuscation, was an admission that drone polices have been illegal and that oversight is needed.

• President Obama admitted that the incursion into Pakistan to murder Osama bin Laden was a political disaster for the United States and an abuse of Pakistan’s sovereignty. Obama acknowledged, not just that Muslims are the primary victims of terrorism but that Pakistan has lost thousands of troops in support of the United States. These facts have been kept from the American public for years.

• President Obama clearly stated that no armed drones could legally be used over American territory. As of his making that statement, any requests by law enforcement to use armed drones is now a criminal act, constituting not just “conspiracy” but “terrorism” as well.

• A key admission, one stated twice during Obama’s speech, involved the issue of fighting an unending war, even a “drone only” war. Obama was clear, political changes in the US tied to a decade of war have led to constitutional abuses, illegal laws, police state tactics and that no democratic government can survive during war. Such a statement would never have been made unless it was meant to convey and admission that America’s constitution has not survived and that American rights are being violated on a daily basis.

• A major component on President Obama’s policy statement covered issues of surveillance and abuses of individual privacy. Of late, “legal opinions” have backed warrantless interception of almost all private communications. As there is no longer a widely used “wire backbone” for telephone service, with mobile, VOIP (voice over internet protocol) and Skype-like services now the norm, “Federalists,” the right wing extremist group now controlling America’s legal system, see an opportunity to intercept everything, not just email and “chat.” It is the hope of many that Obama’s promises will help curtail those broad assaults on American’s lives that have intensified over the past few weeks.

• Perhaps the most important policy change is Obama’s admission that the broad congressional authorization of the use of military force both no longer needed and has, in itself, become a threat. What is clearly stated and missed by the media is that the constitutional basis for continuous warfare has to be ended. This is a powerful issue, one that would declare an end to the ability to send troops into any theatre of operations, one often abused and one that those cynical of America’s intentions now belief has been driven more by economic issues than those of security. The most critical admission made was that American presidents should not have wartime powers in perpetuity. Obama has promised to enact policies to rein in his own ability to fight discretionary and admittedly “unnecessary wars.”

• Toward that end, the President has asked that the AUMF (Authorized Use of Military Force) be ended, that expansion of that mandate be curtailed and that tighter controls be put in place for any future authorizations of that type. What is not being said, but may well be read into this, is that special interest groups that seek to push America into wars have become such a threat that the United States has to curtail its ability to go to war. There would be no reason for Obama to make such a move unless he feared that “sinister forces” are, and have, used the American military for their own gain.

There are key issues of perception. If what is said is unreported or lied about, is the press also lying about other more basis things? Are they lying about the simple issues of “who, what, when and where?”

In fact, is nothing the mainstream media reports to be believed, except sports scores and weather?

Can we even believe that?