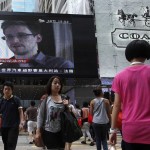 “This is a main stream media discussion of how the US has lost its preeminence of power on the world stage. We are seeing a step-by-step dismantling of the old power structure. It is happening in plain sight for all to see. Whether one wants to see or not. My interpretation: this is a bona fide piece of evidence of another bit of disclosure.” James McManis, in an email conversation with me this morning.

Russian president Vladimir Putin said NSA leaker Edward Snowden is a “free man” and “the sooner he chooses his final destination the better it will be for all of us.” Meanwhile, Snowden is reportedly hiding somewhere inside Moscow’s massive airport. NBC’s Andrea Mitchell reports.

Defied by China and Russia, and blocked at every turn in its worldwide pursuit of a wanted man, the United States is getting an uncomfortable lesson in the limits of its own power.

The inability of U.S. officials to get their hands on Edward Snowden, the security contractor who leaked details of government surveillance programs, has upset delicate diplomatic relationships — and perhaps dealt a blow to America’s image in the world.

“It certainly feeds the image of fading American power,” said Robert Jervis, a professor of international politics at Columbia University, who hastened to add that he was not sure the image was fair.

The spy programs themselves made the United States look in some parts of the world “like a hypocritical bully,” Jervis said, because of the United States’ long record of freedom of information and protection of whistle-blowers.

Chasing Snowden around the globe makes it worse, he said: “There’s nothing worse than an incompetent hypocritical bully.”

Underscoring both the diplomatic and public-relations problems, Russian President Vladimir Putin smiled Tuesday and appeared to make light of the Snowden affair as he ruled out handing him over.

He dismissed American criticisms that Russia is helping Snowden as “ravings and rubbish,” according to Reuters, and told a news conference in Finland: “I myself would prefer not to deal with these issues. It’s like giving a baby pig a haircut: There’s a lot of squealing, but there’s little wool.”

Obama has sought to reset U.S.-Russian relations, work more closely with China and heal America’s reputation in Europe, deeply damaged by the Iraq war. The Snowden affair comes at a tricky time, and at a time when foreign policy analysts say the United States does not have the leverage it otherwise might to persuade other countries to return him.

The U.S. needs China to exert pressure on North Korea to abandon its nuclear program, and wants help from Russia to end the civil war in Syria — even though the powers have chosen opposite sides.

As for Europe, Obama was left to say on a trip to Berlin earlier this month that the United States is not “rifling through the ordinary emails of German citizens or American citizens of French citizens or anybody else.”

Meanwhile, Snowden has eluded the grasp of the United States.

He outed himself more than two weeks ago, in Hong Kong, as the leaker. He hopscotched from there to Russia after Hong Kong dismissed a U.S. extradition request on a technicality — and used its statement to take a jab at the U.S. over cyberhacking.

The United States has filed espionage charges against Snowden and wants him back in the country for prosecution. U.S. officials have come up empty in their pursuit despite sharp rhetoric aimed at China, which partly controls Hong Kong, and at Russia.

Putin’s dismissive remarks came a day after Secretary of State John Kerry warned that there would be “consequences” for both Russia and China if they willfully allowed Snowden to board an airplane.

So far, threats and diplomatic pressure haven’t been enough.

Michael O’Hanlon, a senior fellow at the Brookings Institution, said he understood why the United States is coming down hard on Snowden, but not why Kerry came down so hard on Russia.

“Why would you elevate it to a Tier 1 issue at a time when you’ve got Iran and Syria and North Korea and other matters, which clearly are Tier 1 issues?” he said in a phone interview Tuesday.

It makes perfect sense that China and Russia would want to extract information from Snowden, he said.

“It’s not honorable. It doesn’t excuse anything about Snowden,” he said. “But it’s how the game is played. How it’s always been played.”

The United States does not have an extradition treaty with Russia, but a National Security Council spokeswoman — using much softer language than Kerry had a day earlier — said Tuesday that there is a “clear legal basis” to expel Snowden, based in part on the pending charges against him.

“Accordingly, we are asking the Russian Government to take action to expel Mr. Snowden without delay and to build upon the strong law enforcement cooperation we have had, particularly since the Boston Marathon bombing,” said the spokeswoman, Caitlin Hayden.

“You can do all the paperwork, but it becomes a question of leverage,” he told Reuters. “Either they didn’t have enough or they didn’t exercise enough.”

While the image of the United States may be bruised by a fruitless pursuit of Snowden, greater damage has already been done by the leaks themselves, said Stephen Krasner, a former director of policy planning at the State Department.

Other countries will be more hesitant to share information, for fear that it might be leaked, he said.

“That will absolutely be a problem,” said Krasner, now a professor of political science at Stanford University. “If you’re Britain or Australia or Canada, it’s not that you won’t share information with the U.S., but you’re going to think harder about it.”

Evidence of harm to America’s reputation has already turned up in Europe. A German member of the European Parliament likened the spy tactics to those of the East German Stasi, and another German official called them “monstrous.”

Jervis said both the spying and the long pursuit of Snowden would have “real but imperceptible” effects because they affect the “general attitude” around the world toward the United States.

He likened it to when a trusted friend commits a transgression: “You’re not going to stop totally being friends, but it stays in your mind.”

Peter Alexander of NBC News contributed to this report.