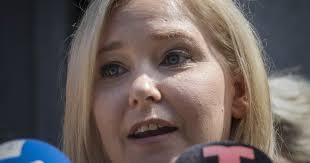 by Mike Brest  & Ellie Bufkin,  published on The Washington Examiner, on November 11, 2019

An ABC News executive claimed that the network decided not to air an interview with a woman who accused convicted child predator Jeffrey Epstein of raping her because there were major holes in her story.

The thwarted interview became public last week when Project Veritas released video of ABC News reporter Amy Robach complaining about her interview with Virginia Roberts Giuffre being spiked on a hot mic in August of this year. She can be heard venting frustration that her story was never given the green light following Epstein’s arrest and subsequent death.

Giuffre accused Epstein of sexual assault, trafficking, and several other felony offenses that took place in the early 2000s. He was awaiting trial in Manhattan when he was found dead in his jail cell at age 66. The New York medical examiner ruled Epstein’s death a suicide, though several people, including his brother and Robach herself, have speculated that he was murdered. Giuffre has alleged that she was Epstein’s sex slave, and claimed that he forced her to have sex with “the elite of the world,” she said in an interview with 60 Minutes. She also alleged she had been raped by Prince Andrew three times, which the royal has vehemently denied.

The network executive told the Washington Examiner on Saturday that Robach’s report on Epstein, which the reporter claimed “had it all,” was not broadcast because “Robach and the investigative team was unable to verify key facts” of Giuffre’s story. While the employee would not elaborate on the apparent holes in the story, a different person familiar with the interview between Robach and Giuffre said that the network never reached out to help them corroborate the parts of her story that they could not verify on their own.

The source also explained that neither Giuffre or her attorney Stan Pottinger, who called Robach’s hot mic moment “spot on,” have ever been contacted in order to corroborate her claims, despite ABC News’s original statement on the video saying that they “have never stopped investigating the story.”

ABC News declined to comment on whether they contacted Giuffre or Pottinger to help corroborate aspects of her story.

In the recorded video, Robach asserted that her interview with Giuffre overlapped with network coverage of the marriage of Prince William and Kate Middleton, and suggested that her reporting could have had an effect on the network’s choice to stop the incriminating footage from airing. “I’ve had the story for three years. I’ve had this interview with Virginia Roberts [Giuffre]. We would not put it on the air,” Robach said in the video. “First of all, I was told, ‘Who is Jeffrey Epstein? No one knows who that is. This is a stupid story.’ Then, the Palace found out that we had her whole allegations about Prince Andrew and threatened us a million different ways. We were so afraid we wouldn’t be able to interview Kate and Will that we, that also quashed the story.”

The source alleged that Buckingham Palace was the driving factor behind ABC News not running the story.