A U.N.-Backed Police Force Carried Out a Massacre in Haiti. The Killings Have Been Almost Entirely Ignored

A U.N.-Backed Police Force Carried Out a Massacre in Haiti. The Killings Have Been Almost Entirely Ignored

At 5 o’clock on the morning of November 13, more than 200 Haitian police officers raided the Grand Ravine area of Port-au-Prince. There was a series of loud explosions, followed by gunfire. For the next six hours, the commotion didn’t stop. The neighborhood was under siege.

The police officers were working with the United Nations Mission for Justice Support in Haiti. It was launched in October, a reboot of a previous mission that had begun in 2004, when thousands of U.N. troops were sent to Haiti following a coup d’etat, tasked in part with restoring stability and reinforcing national police capacities.

And though the U.N. mission issued a statement days after the raid calling for a prompt investigation by Haitian authorities, it did not publicly acknowledge its own role in the operation. But in late December, a U.N. spokesperson confirmed to The Intercept for the first time that the mission had helped plan the raid, though it distanced itself from the civilian deaths.

“The reported civilian death[s] were not part of the planned operation but of a unilateral action conducted by some [Haitian police] officers after the conclusion of the operation,” the spokesperson, Sophie Boutaud de la Combe, wrote in an email. The raid of the school, according to the U.N. statement, was done without authorization, without alerting the police hierarchy, and outside of the operational plan.

Boutaud de la Combe said that, a day after the raid, the U.N. “conducted an internal enquiry with all the unit commanders who participated in the operation.” The U.N. inquiry, not previously reported, absolved the U.N.  finding that U.N. police did not fire their weapons and only “secured the perimeter” of the school, she said.

“None of the [U.N. police] unit proceeded to the location at Maranatha College where the alleged killings took place,” the spokesperson wrote. “The planned portion of the operation went relatively well. The post-operation unilateral initiative of some HNP members to conduct a high risk search, proceeding outside of the operational cadre, without advising the hierarchy, without authorization and contravening the operation plan was not part of the planned operation.” 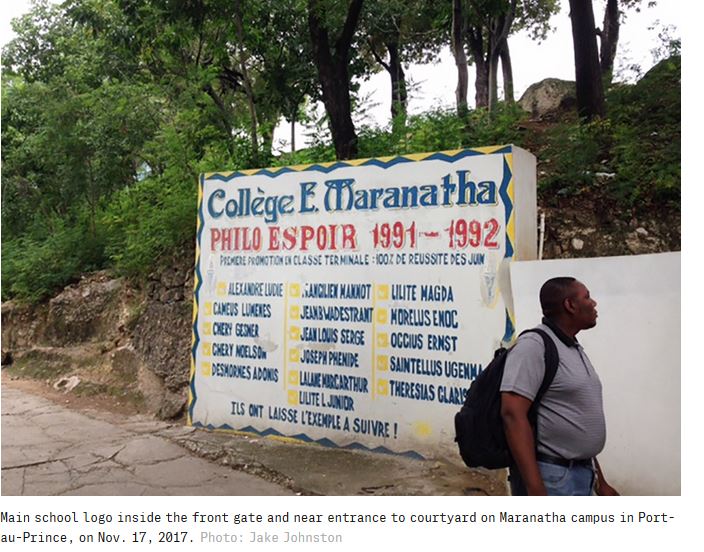 When I arrived at the Maranatha Evangelical College campus, traveling with a broadcast team from Al Jazeera four days after the raid, it was immediately obvious something heinous had transpired.

The blood that stained the concrete was still wet, unable to dry in the blanket of fog and mist that kept the capital unusually cool that particular week. Water pooled in the courtyard’s clogged drain had turned a dark red, partially obscuring an empty tear gas canister. The smell of the violence still hung in the heavy air.

Classrooms and offices had been ransacked, the contents of closets, drawers, and bookcases spilled across the floors and through the doorways. Light crept in through holes left by bullets that had pierced through the thick concrete. Sometime since the raid, someone had swept another five empty tear gas canisters and close to 100 heavy artillery shells into a pile.

The morning we arrived, faculty and students were meeting to mourn those who had been killed. The school was still closed. They gathered in one of the small classrooms, closed the door to us outsiders, and began to sing. The religious hymns — deep, soulful melodies — echoed throughout the courtyard where they mixed with cries of grieving victims and family members anxious to tell their stories.

“I must kill myself,” Monique Larosse, whose nephew was shot in this courtyard days earlier, told us. “Why did they kill him when they know he was not one of the bad men? He was someone who went to church, studied, and had principles.”

The stories Larose, along with other survivors and family members, told me make clear something went horribly wrong on that mid-November day. While there’s a lot still unclear, one thing is for certain — the official narrative is at odds with what the people of Grand Ravine say they witnessed and experienced. And they are a far ways off from finding justice.