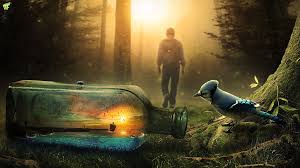 (To read about Jon’s mega-collection, Exit From The Matrix, click here.)

“People sometimes recognize that the content of their thoughts defines the limits of their reality; but they rarely notice that these thoughts also give rise to a SPACE that is limited and holds them in check.” (The Magician Awakes, Jon Rappoport)

I call it new because it still has not been given its proper due. Imagination is beyond “subject matter” or “content” or “knowledge” or “systems” or “philosophy” or “metaphysics.”

It can solve problems. It can dispense with a problem altogether. But imagination is not a solution. It isn’t a method.

Imagination is already there in every person, as a potential. To put it in a slightly different way, imagination comes into being the moment you want it. Even more accurately, perhaps, imagination is imagining. It’s an action. When you want to take that action, you can.

What imagination invents is, of course, different from person to person. Why? Because there is no pre-set pattern. There is no “final answer” at which imagination arrives.

A painter can say, “This painting is the embodiment of everything I’ve been reaching for,” but if he think that means imagination has served its function and can then fold up and dissolve, he is mistaken.

Where does imagining happen? That’s an interesting question. Many years ago, an old acquaintance of mine told me the following amusing story: A painter of horses felt she had come to the end of the line because she wanted to paint large horses on large canvases, but she was convinced she couldn’t picture the large horses because…imagining was taking place in her brain, and her brain was small.

When she finally realized this was a major misconception, she executed a course correction and…she was painting big horses on big canvases.

Imagining doesn’t take place in the brain. As untold numbers of artists down through history have understood, imagining takes place in “a space.” That space is invented. That space is not the same space you see when you look through your window or walk down the street or stand on a roof top. You invent other spaces. You populate them with thoughts, images, sensations.

And these other spaces have no restrictions on size, shape, dimension, and so forth.

Tesla has been quoted as saying that he would envision an entire machine before he built it, and in that imagining he could view all the parts of the machine operating together—and therefore he already knew whether the device would work properly, before he assembled a single component.

The literature called science fiction took off, in part, because the reader was imagining all sorts of wondrous spaces populated by many strange and fascinating creatures and civilizations. Huge spaces.

In other words, there is physical space, the common arena we share…and there are an infinity of possible other spaces a person can imagine.

What a person imagines, in the way of spaces, need not be “scientific” or “clinical” or “according to the laws of physics.” There are no restrictions.

I once spoke with a woman who had, for many years, struggled to win a victory in a just environmental cause. She was a veteran activist leader; and she had never won what she was seeking. She was stymied. I told her she had to imagine a new kind of strategy, and I gave her a writing exercise that might enable her to get outside all the familiar campaigns of the past. Within two minutes, she found what she was looking for. Which is to say, she imagined it.

I wasn’t giving her knowledge or content or a system or an answer. I was showing her a way to invent something new, on her own.

Not long after our conversation, I finished work on my second collection, Exit From The Matrix. The heart and core of that work is a series of imagination exercises that, practiced in a daily fashion, can transform a person’s view of reality and their own power.

The word “education” comes from two Latin roots: “ducere,” meaning to lead, and “e,” the prefix meaning “out of” or “from.” Education, in that sense, is leading something out of the person, something that was already there.

Imagination, with all its awesome possibilities, is already there in a person. The “teaching” part involves bringing out that innate capacity so that it becomes conscious.

The bottom line: when all the imagining a person does is happening subconsciously, he’s trapped in a machine-like habit.

He becomes glued to the repetitious content and the sameness of what he keeps imagining over and over—and it becomes his chronic reality.

Conversely, when the person imagines and creates consciously, he becomes aware of his power and its immense latitude, and his freedom.

This makes all the difference.

Because, consciously, he can imagine and invent the future he truly desires.