A controversial startup that charges $8,000 to fill your veins with young blood now claims to be up and running in 5 cities across the US

bz: so many thoughts and question come into view with this “start up” and many covert operations similar to it already up and running for a very long time. This is a good one to play with as its a public start up and published in Business Insider, “a main stream business publication”… there is no details about the “donors”… and what you will find is that, that is a huge ongoing covert business already. And there is nothing voluntary about it. Ambrosia may be a very apt name for the start up as there is a good likelyhood all the young blood is infused with Adrenochrome, from the involuntary donors. As this IS Ambrosia to the Illuminati and elite and is more highly prized.

A controversial startup that charges $8,000 to fill your veins with young blood now claims to be up and running in 5 cities across the US

by Erin Brodwin, published on Business Insider, on January 19, 2019 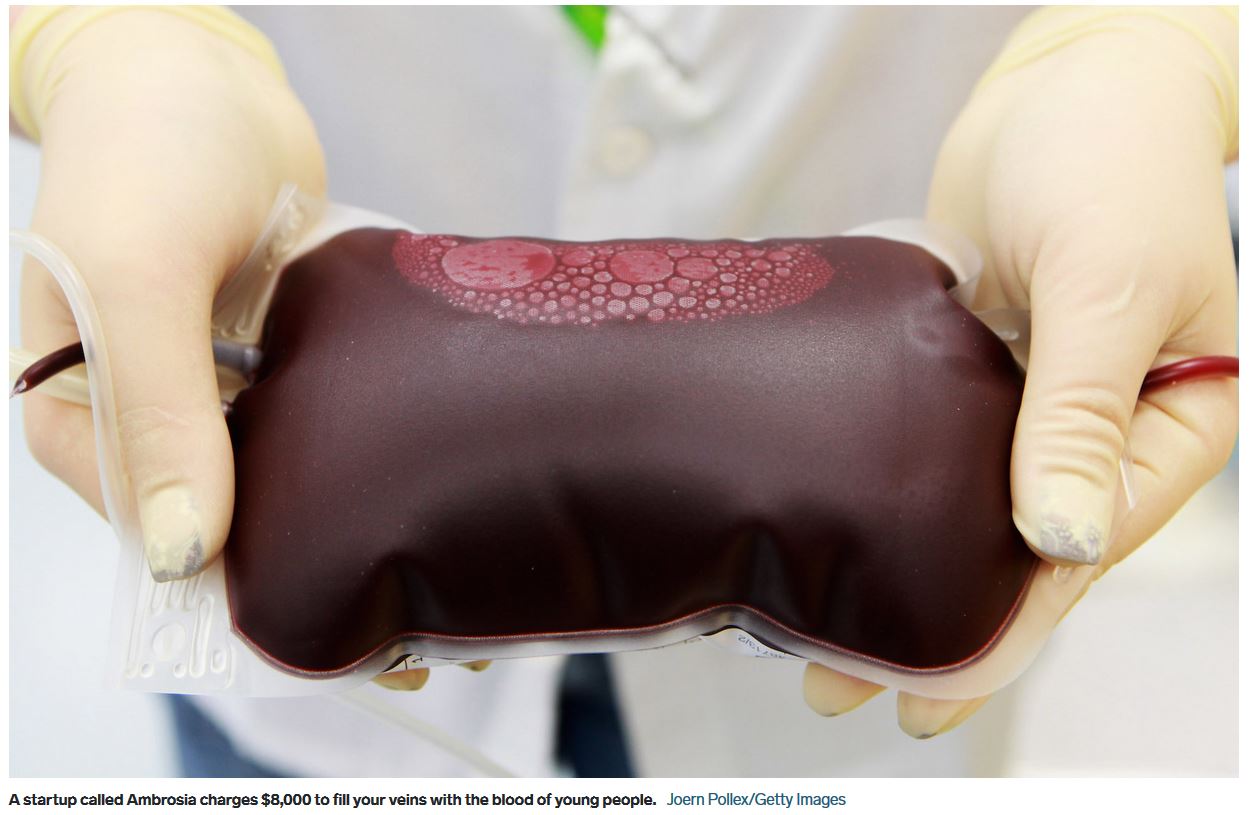 To Jesse Karmazin, a startup founder and Stanford Medical School graduate, blood is the next big government-approved drug.

Roughly three years ago, Karmazin launched Ambrosia, a startup that fills the veins of older people with blood from younger donors, hoping the procedure would help conquer aging by rejuvenating the body’s organs. As Business Insider previously reported, there’s little to no evidence to suggest this would work.

The company is now up and running, Karmazin told Business Insider on Wednesday. Ambrosia recently revamped its website with a list of clinic locations and is now accepting payments for the procedure via PayPal. Two options are listed: 1 liter of young blood for $8,000, or 2 liters for $12,000.

In the fall, Karmazin — who is not a licensed medical practitioner — told Business Insider he planned to open the first Ambrosia clinic in New York City by the end of the year. That didn’t happen. Instead, he said, the sites where customers can get the procedure include Los Angeles; San Francisco; Tampa, Florida; Omaha, Nebraska; and Houston, Texas.

In 2017, Ambrosia enrolled people in a clinical trial designed to find out what happens when the veins of adults are filled with blood from younger people. While the results of that study have not been made public, Karmazin told Business Insider in September that they were “really positive.”

There’s no scientific evidence to suggest that the treatments could help anyone, and several experts who spoke to Business Insider have raised red flags.

But because the Food and Drug Administration has approved blood transfusions, Ambrosia’s approach has been able to continue as an off-label treatment.

There appears to be significant interest. A week after putting up its first website in September, the company received roughly 100 inquiries about how to get the treatment, David Cavalier, Ambrosia’s chief operating officer at the time, told Business Insider in the fall. That led to the creation of a waiting list, Cavalier said.

Before departing from Ambrosia, Cavalier worked with Karmazin to scout several potential clinic locations in New York and organize talks with potential investors, he said.

Because blood transfusions are already approved by federal regulators, Ambrosia does not need to demonstrate that its treatment carries significant benefits before offering it to customers.

As of September, the company had infused close to 150 people, ranging in age from 35 to 92, with the blood of younger donors, Cavalier said. Of those, 81 participated in its clinical trial.

The trial, which involved giving patients 1.5 liters of plasma from a donor between the ages of 16 and 25 over two days, was conducted with David Wright, a physician who owns a private intravenous-therapy center in Monterey, California. Before and after the infusions, participants’ blood was tested for a handful of biomarkers, or measurable biological substances and processes thought to provide a snapshot of health and disease.

Trial participants paid $8,000, the same price as one of the procedures now listed on Ambrosia’s website.

“The trial was an investigational study,” Cavalier said in September. “We saw some interesting things, and we do plan to publish that data. And we want to begin to open clinics where the treatment will be made available.”

Karmazin added in September that he believed the trial showed the treatment to be safe.

Young blood and anti-aging: Are there any benefits?

Karmazin is right about the safety of blood transfusions and their capacity to save lives. 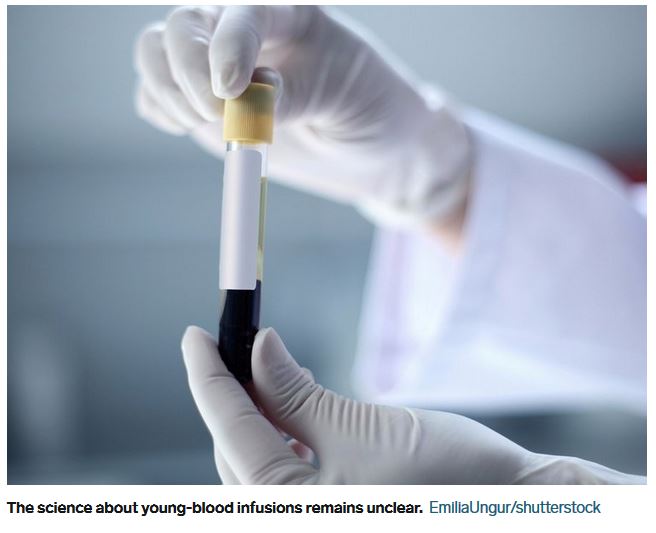 A simple blood transfusion, which involves hooking up an IV and pumping the plasma of a healthy person into the veins of someone who’s undergone surgery or been in a car crash, for example, is one of the safest life-saving procedures available. Every year in the US, clinicians perform about 14.6 million of them, meaning about 40,000 blood transfusions happen on any given day.

But the science remains unclear about whether infusions of young blood can help fight aging.

In early experiments in mice, Tony Wyss-Coray, a director of the Alzheimer’s research center at Stanford University Medical School who founded a longevity startup focused on blood plasma called Alkahest, found that swapping old blood plasma for young blood plasma appeared to provide some limited cognitive benefits. The 150-year-old surgical technique he used, parabiosis — whose name comes from the Greek words “para,” or “beside,” and “bio,” or “life” — involves exchanging the blood of two living organisms.

Read more: The CEO of a startup aimed at harnessing the benefits of young blood shares his real plan to beat aging

After Wyss-Coray’s mouse experiments, he and a team of Alkahest researchers took a big leap and in 2017 completed a monthlong study in which they transfused a standard unit of blood plasma from younger, healthy human volunteers into nine older adults with mild to moderate Alzheimer’s disease.

Their results were published this month in the journal JAMA Neurology. Because the study was small and short, the authors were fairly limited in drawing conclusions about what kind of benefits the plasma offered. They described the treatment as “safe, well tolerated, and feasible” and said the findings should be explored further in larger trials.

In a January interview with Business Insider, Alkahest CEO Karoly Nikolich described seeing cognitive boons in the older participants, including an improved sense of self and recognition of one’s environment and location, as tested by a standard screening tool called the Mini-Mental State Examination.

But Alkahest’s work is very different from Ambrosia’s.

As Business Insider previously reported, Alkahest researchers want to develop drugs for age-related diseases that are inspired by their work with plasma; they are not looking to open a clinic.

Nevertheless, Karmazin is optimistic that blood has a range of benefits. He got the idea for his company as a medical student at Stanford and an intern at the National Institute on Aging, where he watched dozens of traditional blood transfusions performed safely.

“Some patients got young blood, and others got older blood, and I was able to do some statistics on it, and the results looked really awesome,” Karmazin told Business Insider in 2017. “And I thought this is the kind of therapy that I’d want to be available to me.”

So far, no one knows whether young blood transfusions can be reliably linked to lasting benefits.

Karmazin said that “many” of the roughly 150 people who had received the treatment described benefits including renewed focus, better memory and sleep, and improved appearance and muscle tone.

However, it’s tough to quantify these benefits before the study’s findings are made public. There’s also the possibility that simply traveling to a lab in Monterey and paying to enroll in the study could have made the people feel better.

But Karmazin remains hopeful that the benefits he said he’s seeing are the result of young-blood transfusions.

“I’m really happy with the results we’re seeing,” he said in September.