We can only imagine the twenty-four hour media blitz that would be unleashed if this had happened with the Trump campaign, or on anyone’s staff even remotely associated  with President Trump past or present.

But when the story first broke in the middle of this week of a mole working on behalf of the Russian Chinese government on a powerful Democrat Senate Intelligence Committee member’s staff, it passed in the mainstream media with a yawn, and though slowly gaining visibility still hasn’t been covered by some of the large cable networks or newspapers.

Senator Dianne Feinstein (D-Calif.) was “mortified” upon learning that a Chinese spy had worked in her office for nearly 20 years. 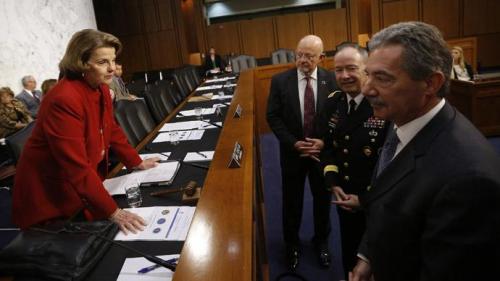 According to new details initially unveiled in a Politico report on Russian and Chinese spies in Silicon Valley, a staffer who was fired five years ago had managed to stay on her team for nearly two decades likely out of motivation to collect information related to her long tenure on the Senate Intelligence Committee, for which she maintains top-secret security clearance.

Sen. Feinstein reportedly made the staffer retire upon being alerted by the FBI. He worked as her personal driver and clerk for her Bay Area office, as CBS San Francisco relates:

On Wednesday, the San Francisco Chronicle uncovered additional details in a column written by reporters Phil Matier and Andy Ross. The column revealed that the Chinese spy was Feinstein’s driver who also served as a gofer in her Bay Area office and was a liaison to the Asian-American community.

He even attended Chinese consulate functions for the senator.

Feinstein — who was Chair of the Senate Intelligence Committee at the time — was reportedly mortified when the FBI told her she’d be infiltrated. Investigators reportedly concluded the driver hadn’t leaked anything of substance and Feinstein forced him to retire.

Perhaps the most stunning part of the story is that he remained in her office for nearly two decades, reportedly having contact with China’s Ministry of State Security for an unknown number of years during that lengthy period.

Though it’s unclear when his contact with the Chinese state began, follow-up reports by local San Francisco sources claim he may have been an unwitting asset.

The San Francisco Chronicle in a follow-up investigation reports:

According to our source, the intrigue started years earlier when the staffer took a trip to Asia to visit relatives and was befriended by someone who continued to stay in touch with him on subsequent visits.

That someone was connected with the People’s Republic of China’s Ministry of State Security.

“He didn’t even know what was happening — that he was being recruited,” says our source. “He just thought it was some friend.”

Neither the FBI nor Chinese embassy has issued official comment in response to the bombshell story; however, various reports cite investigators close to the matter who say the mole was able to obtain little or nothing of substance.

It’s believed that the advantage of Chinese intelligence placing a driver with the Chair of the Senate Intelligence Committee is that he may have picked up on tidbits of sensitive conversations at moments the senator thought she could comfortably speak to colleagues and staff.

One former counter-espionage FBI agent in the Bay Area, Jeff Harp, told CBS San Francisco he believes someone like Sen. Feinstein would constitute a key, high value target for foreign intelligence and eavesdropping:

Harp pointed out politicians with access to classified information are generally trained on what not to say and when not to say it. But he also noted when you have a driver behind the wheel day in and day out for 20 years, there are more opportunities to slip up.

“Think about Diane Feinstein and what she had access to,” Harp explained. “One, she had access to the Chinese community here in San Francisco; great amount of political influence. Two, correct me if I’m wrong, Dianne Feinstein still has very close ties to the intelligence committees there in Washington, D.C.”

And of Silicon Valley being a hotbed of Chinese espionage, Harp continued, “They also have an interest in the economy here. How to get political influence here. What’s being developed in Silicon Valley that has dual-use technology. All of that is tied to the Bay Area.”