There’s a new space race and it’s not between the U.S. and Russia. It’s between private companies and it’s attracted multimillionaires and billionaires, like Elon Musk and Jeff Bezos. A less likely player is Las Vegas real-estate tycoon, Robert Bigelow, who, at 73, is making the biggest gamble of his life — not on rockets — but on expandable spacecraft, large, lightweight structures that inflate in space, a technology that could dramatically change how humans live and work in zero gravity. 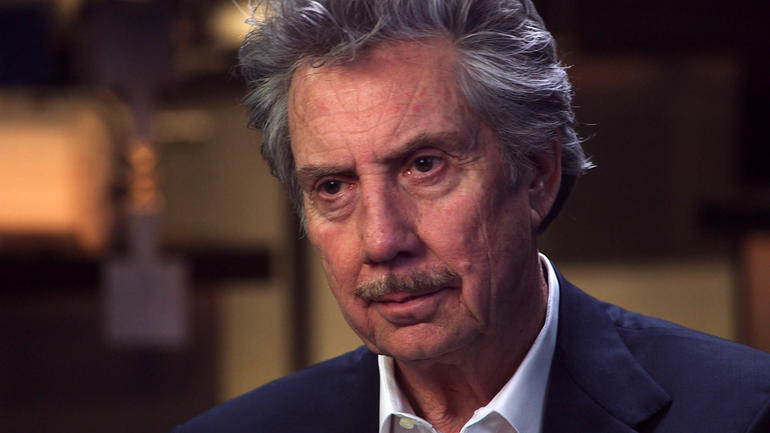 NASA has partnered with Robert Bigelow, who’s an unconventional figure in the aerospace world. He’s more at home on the Vegas strip than at America’s space agency, and he’s obsessed with aliens and UFOs. In the spring of last year, he and NASA carried out an historic test to prove his high-flying technology is ready to support humans in space.

When Elon Musk’s SpaceX rocket roared into the skies above Cape Canaveral, it was on a mission for NASA, carrying nearly 7,000 pounds of cargo to the International Space Station — food, supplies and Robert Bigelow’s expandable spacecraft.

Robert Bigelow: Flying to the International Space Station is a really big deal. It’s an experimental spacecraft, which is a big deal. We don’t know how it’s gonna behave for sure.

Lara Logan: Does that make you nervous?

Bigelow’s inflatable was packed inside the rocket’s cargo capsule, known as Dragon, which you see here making it’s way to the space station. We sped up this video from NASA because it took two days to get there.

It was moved into place, then just over a month later, we joined Bigelow at Houston Mission Control to see it inflate, the last critical step. If it worked, it would make history, the first expandable structure for humans in space.

Lara Logan: So what is it like for you this moment watching this happen?

Robert Bigelow: Severe curiosity as to what’s gonna happen next.

Some 250 miles above the Earth, NASA astronaut Jeff Williams injected air. It was supposed to last about an hour. But took two tries over two days.

Finally, it worked. In this time-lapse video, you’re seeing it expand in seconds. Close to $300 million and 16 years to get here. But for Bigelow, it was just a beginning. 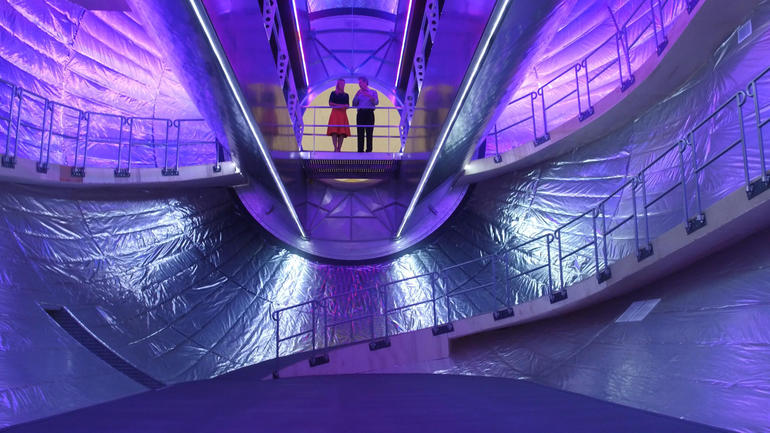 Inside the Olympus CBS News

Under 80-foot ceilings at his company in Las Vegas, he showed us his next generation plans for outer space. He calls this the Olympus, a mansion for the skies. It’s so large the rocket powerful enough to launch it is still years away.

Lara Logan: Is there anything this big that astronauts are working in today?

Robert Bigelow: No, nothing even remotely close.

Bigelow said he can turn this into anything a client wants — a first-ever orbiting hotel, hospital or inflatable research facility. The B330 is smaller than the Olympus. This is what it would look like if it were used as a space station.

Lara Logan: This can function on its own?

Robert Bigelow: Well, it can function as a standalone destination because it has all the facilities that it would take to keep people alive. 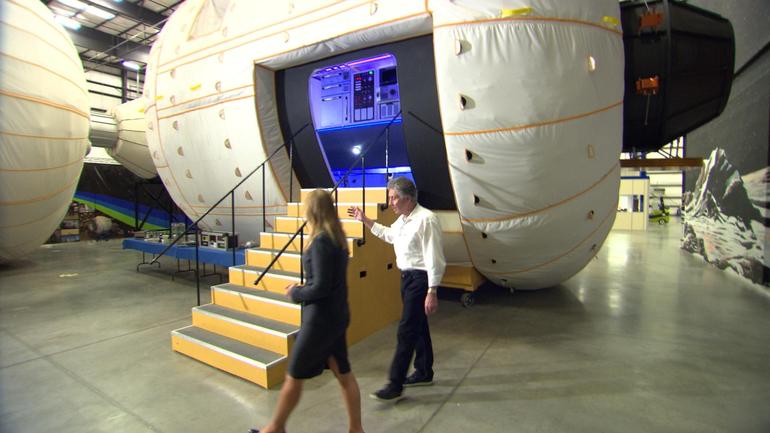 For countries hoping to make their mark in space, Bigelow said this offers an affordable way in. Private industry, he believes, is becoming more dominant in developing space.

Robert Bigelow: NASA and government still has a role because it is still in a sort of embryonic stage. And there will come a time when it’s not necessary at all.  And the commercial world will absolutely be the leader for everything in space.

Lara Logan: What about the idea of national pride and what we do as nations. Neil Armstrong walking on the moon. He didn’t do that for a private company. He did that for the United States of America and it meant something.

Robert Bigelow: You bet it did. And that created a period of inspiration that hasn’t been matched ever since. So now we’re looking for a new era that says, “All right, how can we now shape this to where it’s more accessible for a lot more folks at a lot less cost and still have safety and reliability at the same time?”

With no formal training in science or engineering, Robert Bigelow created an aerospace company with scientists and engineers that’s achieved what no one else in the industry has done. His expandable spacecraft are the first and only alternative to the metal structures that have housed every astronaut in space for over half a century.

For Bigelow, it all began with growing up in a time of nuclear tests. As a young boy, he would watch the skies over Nevada light up with the bursts of atomic bombs.

Robert Bigelow: Witnessing those explosions in the 50s and 60s, you weren’t aware of the ultimate ramifications of those kinds of things but there was a real strong feeling of energy and a secretiveness and so forth and it was cool.

Later, he watched Neil Armstrong take the first steps on the moon, a moment in history he said still inspires him.

But on this canyon road just outside Las Vegas, Robert Bigelow’s story takes a turn that some may find, to put it lightly, improbable. He told us this is where his grandparents had a close encounter with a UFO.

Robert Bigelow: It really sped up and came right into their face and filled up the entire windshield of the car. And it took off at a right angle and shot off into the distance. 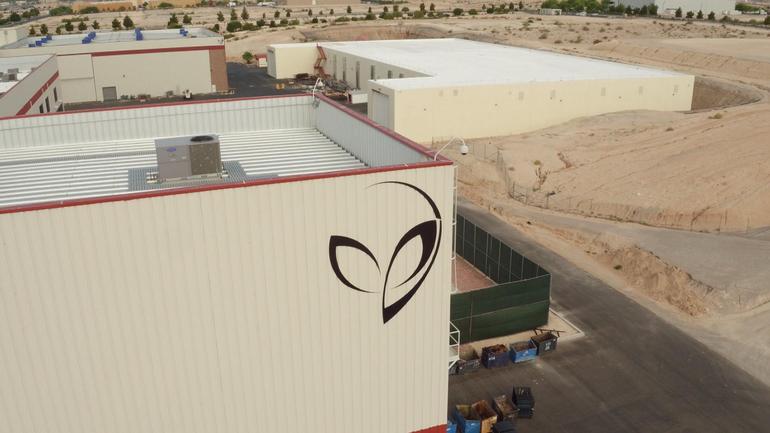 The story sparked his obsession, and explains the alien looking out from the side of Bigelow Aerospace.  And it made for the kind of conversation you don’t ordinarily have with an accomplished CEO.

Lara Logan: Do you believe in aliens?

Robert Bigelow: I’m absolutely convinced. That’s all there is to it.

Lara Logan: Do you also believe that UFOs have come to Earth?

Lara Logan: Is it risky for you to say in public that you believe in UFOs and aliens?

Robert Bigelow: I don’t give a damn. I don’t care.

Lara Logan: You don’t worry that some people will say, “Did you hear that guy, he sounds like he’s crazy”?

Lara Logan: Why not?

Lara Logan: Do you imagine that in our space travels we will encounter other forms of intelligent life?

Robert Bigelow: You don’t have to go anywhere.

Lara Logan: You can find it here? Where exactly?

The FAA confirmed to us that for years, it referred reports of UFOs and other unexplained phenomena to a company Bigelow owns. He told us he’s had his own close encounters, but declined to go into detail.

Robert Bigelow’s quirky and he knows it, but when you have as much money as he does, no one — not even NASA — seems to care.

He bought the idea for his inflatable technology from the space agency. NASA had been working on this since the early 1960s — but when Congress killed its program in 2000, Bigelow seized the opportunity and invested tens of millions of dollars to advance NASA’s original idea.

It took him just six years to launch the first expandable spacecraft into orbit. His second followed a year later. But those were never meant for humans.

At that time, Bigelow was still trying to prove his inflatable structures would survive in space. A decade later, with both still circling the Earth intact, NASA felt the technology was ready to be tested for humans. Bigelow still monitors these spacecraft from his own mission control in Las Vegas. 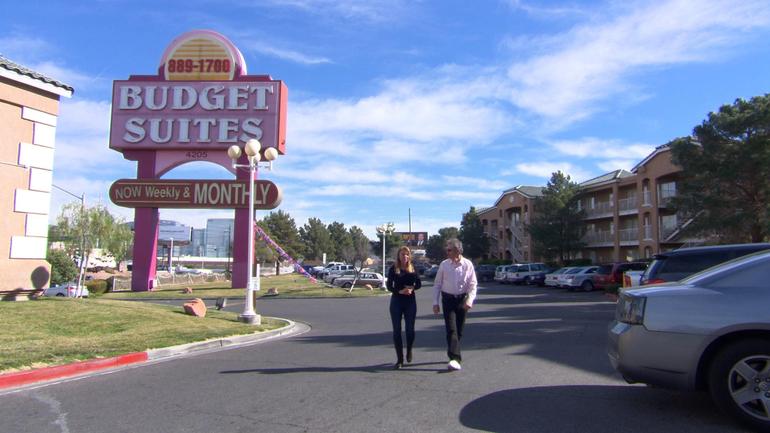 Robert Bigelow made his fortune with a low-budget chain of rental apartments called Budget Suites of America. CBS News

Robert Bigelow didn’t start out a rich man. He made his fortune not far from the Vegas strip, with this — a chain of low budget, long-stay rental apartments called Budget Suites of America. In a time of glitzy high rises, he focused on creating homes for the city’s temporary workers. And it paid off. Today, he has 19 of these across three states.

Lara Logan: And made you how much money?

Lara Logan: Well, “aerospace indulgence” is a big term. So do you want to put a figure on that?

Lara Logan: Of your own money?

Lara Logan: So for a man who has had extraordinary success in the business world–

Robert Bigelow: Some some.

Lara Logan: This space business is financially the worst investment you’ve ever made?

Robert Bigelow: It’s atrocious. I mean, we are not in control of our own destiny.

Lara Logan: Who is in control of your destiny?

Thanks to innovators like Elon Musk and Jeff Bezos, Bigelow told us reusable rockets — like this one you see sticking a perfect landing after launching his inflatable — are making routine transportation a real possibility in the next decade.

When Robert Bigelow’s inflatable structure was added by NASA to the International Space Station, humans had never been inside one in space. This test would be the first time. And astronaut Jeff Williams, the first American to experience it. 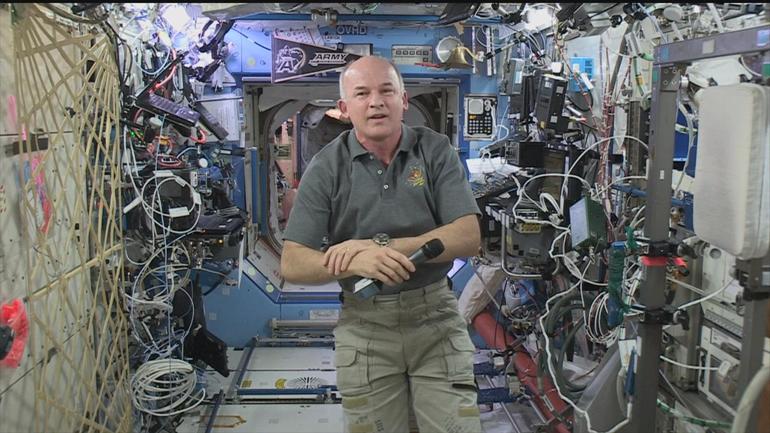 The interior only has sensors, and for two years, NASA will use them to monitor how this holds up to solar radiation and extreme temperatures.

Lara Logan: How far are you from us right now?

Jeff Williams: Well currently we’re over Libya as I recall, but when we started this conversation, I think we were probably over the Atlantic Ocean.

From Bigelow’s Mission Control, NASA connected us with Jeff Williams on the space station. As we spoke to him about Bigelow’s inflatable room, he was orbiting the Earth at nearly five miles a second.

Lara Logan: And how is it holding up?

Jeff Williams: Oh, it’s holding up well. It was a little bit cool, and that was expected. Cooler than the air here, but not overly cold, and had that new car smell that you would expect. And it was very quiet, too.

Lara Logan: What do you think about men like Mr. Bigelow, people with deep pockets, private citizens getting involved in your world, in the world of space?

Jeff Williams: Oh, I’d say anybody that has the means to do exploration and is willing to jump in the game, more power to them. Private enterprise is trying to open up economic doors to space exploration and everybody will benefit from that.