528HZ Sound “Miraculously” Cleaned Oil Polluted Water in The Gulf of Mexico, According to a New Study by a Canadian Researcher
Originally published on 528Records 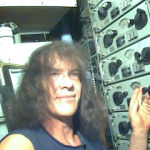 A series of sounds played to oil polluted water from the Gulf of Mexico has “miraculously” cleared test samples of the deadly petrochemicals, says a well known Canadian researcher.

According to John Hutchinson, an electro-magnetic energy expert from Vancouver, B.C., Canada, a selection of “music” has helped purify poisoned water. The frequencies included the “sound of Jupiter,” recently recorded by NASA, vibrating close to 528Hz frequency.

That sound energy has been determined to match the color greenish-yellow–the heart of the rainbow, the electromagnetic color spectrum, celebrated by the botanical world, according to Dr. Leonard Horowitz, who has published most on that pure tone. Nature obviously celebrates that shade, the pigment chlorophyll, to produce oxygen and energy needed for life. 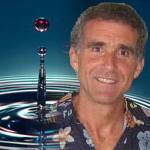 According to Dr. Horowitz, Hutchinson’s study results are most promising, as they were certified by the Analytical Chemical Testing Laboratory, Inc. of Mobile, Alabama, and are consistent with studies and predictions based on the most advanced discoveries in mathematics, physics, and biophysics.

528Hz frequency, the “Miracle” note of original Solfeggio musical scale, is only one of nine “core creative frequencies” in a “Perfect Circle of Sound” that animates physical reality, like atomic energy technology, using spinning electrons vibrating with electro-resonance.

This is an image of one of the most perfect, detailed, pure water crystals ever photographed. It formed to reflect the sound of the sun. 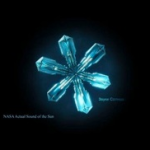 In 2009, researcher David Sereda sent Dr. Horowitz NASA recordings of the sun along with this crystallograph produced by researchers in Russia. Later, Dr. Horowitz compared the sound of the sun, and jupiter to the pure tones of “The Perfect Circle of Sound” frequencies, including 528Hz. The Harvard trained public health expert noted 528Hz was most obviously harmonic to both recordings.

Dr. Horowitz believes 528Hz is also fundamental to “LOVE”—the “Universal Healer;” and he recommends combining the frequency of “LOVE/528,” with the “Universal Solvent”—Water—to advance “the future of medicine”—LOVE Hydrosonics. To this end, the award winning author and film-maker publishes two online journals Hydrosonics, that discusses the powerful impacts of sounds on water, and Medical Veritas, heralding advances in natural ways to end pollution and advance healing. 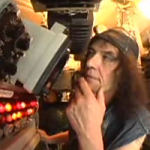 John Hutchison, is a well known scientist best known for examining The Bermuda Triangle, and explaining strange occurrences in this infamous area of the Atlantic ocean, called the “Hutchison-Effect,” all associated with electromagnetic disturbances of unknown origin. The Canadian Government has persecuted Hutchinson heavily over the years, the last time for supposedly causing his neighbor to levitate without consent.

Hutchinson’s partner, Nancy Lazaryan, a journalist from Minnesota, said their research was “intuited” to include the 528Hz sound that they observed causing oxygen to bubble up heavily from the bottom of the oil soaked Gulf and Perdido Bay, between Florida and Alabama.

The couple started their research requesting samples of polluted Gulf water be sent to Hutchison’s lab in Vancouver. There, Hutchison and Lazaryan experimented using ancient Solfeggio sounds and Gregorian chant frequences that have been traditionally used for healing. The frequencies were applied to several polluted water samples using audio and radio waves, with wonderful results.

So Hutchison and Lazaryan packed up their lab equipment, borrowed a trailer, and farm truck, and traveled from Canada to the Gulf. Their chemical analysis from their first “open air frequencies” experiments in Perdido Bay proved to them that, “the Gulf water can be healed.”

To date, the federal government has relied on the deadly oil dispersant, Corexit, a Goldman Sach/Boots & Coots chemical causing a lot of people, and wildlife, to get sick and die.

Alternatively, Hutchinson and Lazaryan recommend a harmonic “stream of sound” to completely purify the polluted water. The couple claims the inspiration for these harmonics came from the Essenes, a sect of Israel where Jesus was a member. The Essenes “inner circle” taught the “stream of sound” as part of the Creator’s power to create.

The 528 hz tone is known by the ancients to be a “healing frequency,” and many people believe it can be used to repair damaged DNA. Most recently, Dr. Horowitz, working with mathematician Marko Rodin, advanced the mathematical relationship to genetic structuring, as DNA segments reflect Rodin’s “infinity pattern,” that others predict will revolutionize everything.

In 2009, Dr. Horowitz produced Live H2O: Concert for the Living Water , in which groups from 72 countries participated by singing and chanting in 528Hz, praying for all polluted water to be blessed worldwide. 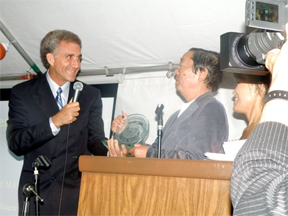 One of the honorees at LIVE H2O was Dr. Masaru Emoto who conducted years of research sending purifying intentions and “LOVE/528Hz frequency vibrations into water with astonishing results published in dozens of languages and two New York Times bestselling books. Dr. Emoto actually filmed the molecular structure of the water changing from disorganized arrays of crystals in polluted water, into beautiful snowflake formations included visible “messages” as through the water was actually “conscious.”

Dr. Horowitz, among Dr. Emoto’s leading scientific supporters, explains this metaphysically by relating the power of LOVE in human hearts to the power of the Creator to respond to prayer and heart-felt loving intentions to heal the world and be helpful to one another.

Hutchison and Lazaryan, likewise, are hoping to bless the planet with their new discoveries in the Gulf of Mexico.

“We declare PEACE,” says Lazaryan, “the war upon the Gulf is over.”