by Matt Agorist , published on The Freedom Thought Project, on March 24, 2017

Washington, D.C. — A total of 501 juveniles have been reported missing in D.C. since the beginning of the year. This startling number has forced the hands of several officials who’ve written a letter to call on special help from the Justice Department in investigating the matter.

The letter, obtained by the Associated Press, asked FBI Director James Comey and Attorney General Jeff Sessions to “devote the resources necessary to determine whether these developments are an anomaly or whether they are indicative of an underlying trend that must be addressed.” It was signed by Congressional Black Caucus Chairman Cedric Richmond (D-La) and Del. Eleanor Holmes Norton, who represents D.C. in Congress.

As the AP reports, the District of Columbia logged 501 cases of missing juveniles, many of them black or Latino, in the first three months of this year, according to the Metropolitan Police Department, the city’s police force. Twenty-two were unsolved as of March 22, police said.

The Twitter profile for the DC police department is quite literally riddled with images of missing young black and latino girls. In spite of the officials’ concern and the posts on Twitter, police are assuring the public that there is nothing out of the ordinary. 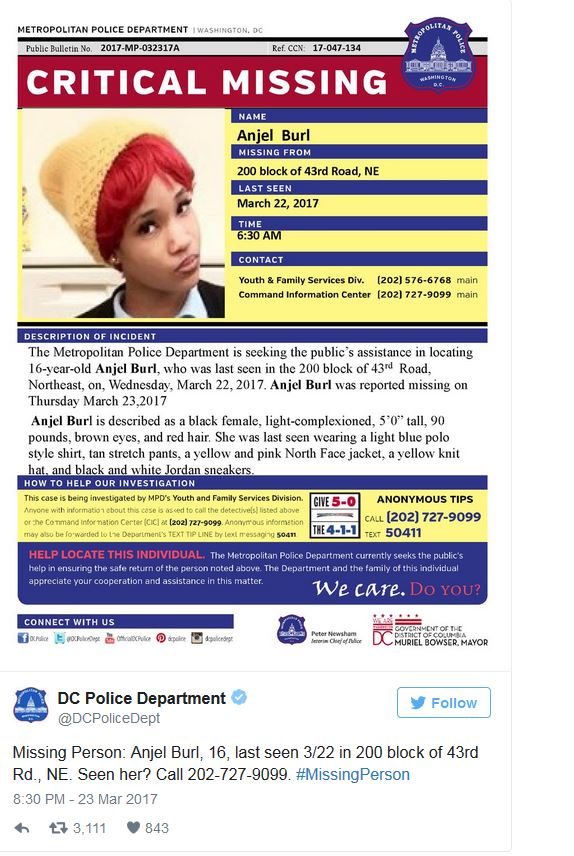 “We can’t focus on the numbers,” said Derrica Wilson, co-founder of the Black and Missing Foundation. “If we have one missing child, that’s too many.” 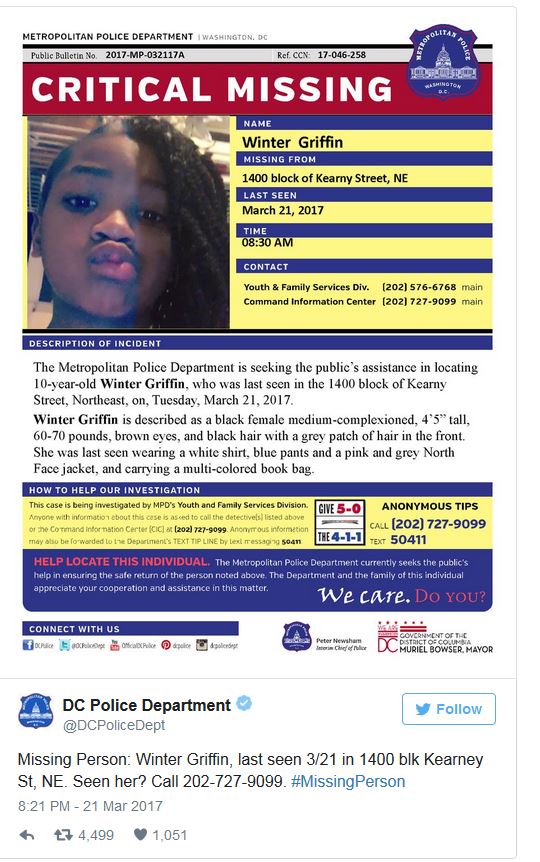 Police then went on to dispel talk of these girls being kidnapped and sold into slavery by human traffickers.

“We have no indication to believe that young girls in the District are being preyed upon by human traffickers in large numbers,” said police commander Chanel Dickerson, leader of the Youth and Family Services division, according to NBC News 4.

Notice how Dickerson said “in large numbers” as a qualifier, meaning he didn’t rule out the fact that there are human traffickers in the area preying on young girls.

As the Free Thought Project pointed out on several occasions, some of these traffickers have already been caught in D.C. — and some of them have been cops.

Linwood Barnhill Jr., a veteran of the D.C. Police Department, was exposed by the Free Thought Project for running a child sex ring out of his house. In 2014, in an early morning search warrant issued for his Southeast D.C. apartment found a 15-year-old girl who had previously been reported missing by her parents.

When police rescued the girl she told officers that she had met six other girls inside the Southeast D.C. apartment who told her they were also being prostituted, including with ads posted on backpage.com. Barnhill also took naked photos of the girls, purportedly for use in advertisements for sex.

Marijuana, condoms and a large mirror were also seized from the apartment; law enforcement officials say that the seized mirror had the names of other females who were being trafficked written on it.

Around that same time, another cop in the area was also exposed and arrested for trafficking teens. Lamin Manneh, 32, of Baltimore, pleaded guilty to traveling across state lines and using a telephone and internet to operate a prostitution business using two teens he prostituted out over 300 times.

According to the AP, Wilson also said she is concerned about whether human trafficking is a factor, citing the case of 8-year-old Relisha Rudd, who has been missing since she vanished from a city homeless shelter in 2014. A janitor who worked at the shelter was found dead of apparent suicide during the search for the girl.

“They prey on the homeless, they prey on low-income children, they prey on the runaways, they prey online,” Wilson said.
“Whether these recent disappearances are an anomaly or signals of underlying trends, it is essential that the Department of Justice and the FBI use all of the tools at their disposal to help local officials investigate these events, and return these children to their parents as soon as possible,” Richmond said.

According to the anti-Human Trafficking group, Polaris, located in D.C., the number of trafficked humans in the US is startling.

Sadly, the US government appears to spend far more time looking for an illegal plant or for Tom Brady’s jersey, than they do on missing children.

Matt Agorist is an honorably discharged veteran of the USMC and former intelligence operator directly tasked by the NSA. This prior experience gives him unique insight into the world of government corruption and the American police state. Agorist has been an independent journalist for over a decade and has been featured on mainstream networks around the world. Agorist is also the Editor at Large at the Free Thought Project. , Steemit, and now on Facebook.