The latest closures will affect the bank’s RBS and NatWest brands in England, Wales and Scotland, leaving it with around 744 branches 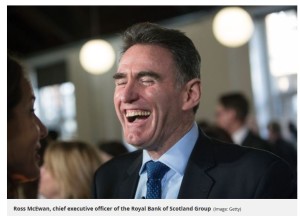 Royal Bank of Scotland is to close 259 branches resulting in 680 job losses after the state-backed lender said more people are choosing to bank online or on mobile.

The bank, still 72% owned by the taxpayer, is the third this week to announce branch closures and job cuts, following Lloyds and Yorkshire Building Society.

However, RBS hopes to limit the number of redundancies to 680 by redeploying the remaining staff.

An RBS spokesman said: “More and more of our customers are choosing to do their everyday banking online or on mobile.

“Since 2014 the number of customers using our branches across the UK has fallen by 40% and mobile transactions have increased by 73% over the same period.

“Over 5 million customers now use our mobile banking app and one in five only bank with us digitally.”

However, union Unite described the move as a “betrayal” and ripped into the Government for allowing the closures to proceed.

The union’s national officer Rob MacGregor also said that the move could effectively signal the end of banking in branches.

He added: “The Royal Bank of Scotland has decided to decimate its bank branch network.

“Now serious questions need to be asked about whether these closures mark the end of branch network banking.

“This announcement will forever change the face of banking in this country resulting in over a thousand staff losing their jobs and hundreds of high streets without any banking facilities.

“Why is the Government signing off this alarming branch closure programme?”

RBS insisted that it is providing customers with “more ways to bank than ever before”.

Paul Wheelhouse, Scottish Government Minister for Business, Innovation and Energy, said: “The news of further branch closures from RBS will be hugely concerning to many people in Scotland as it now not only affects, potentially, staff at RBS but also leaves large areas of Scotland, particularly rural areas, with limited branch coverage.

“The worst impact will be on the most vulnerable members of our society, for many of whom going into a branch is the only feasible way to conduct their banking.

“While recognising that footfall in branches is falling, due to online banking, RBS, and other banks, must take into account the needs of all customers – not just those who can access and use digital services.”

The move comes after the bank’s chief executive Ross McEwan signalled in October that the lender was moving on from its troubled past when it posted its third consecutive quarter in the black.

Last week, the Government also said that it is dusting off plans to re-privatise the lender by offloading around two thirds of its stake, bought at the height of the financial crisis.

It plans to restart share sales in RBS by the end of the 2018-19 financial year and sell off £3 billion a year over five years.

The Government said it now faces a £26.2 billion loss on its stake in RBS, down from a previous forecast of £29.2 billion in March, after a recent recovery in the value of the bank’s shares.

But it will still see the Government take a hefty loss on its stake in the lender, with shares languishing well below the average 502p-a-share price paid during the 2008 and 2009 bailout – at around 271p at today’s prices.