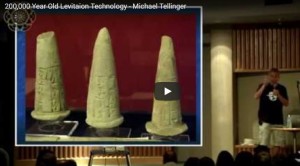 Michael Tellinger shares a new video from his 2017 HIDDEN ORIGINS – USA & CANADA tour. This is the last hour of a 4 hour presentation in which he goes into the new science of sound, resonance, magnetism and SASER technology – Michael presents the mysterious cone shaped and torus tools which were used by the ancient civilisations to achieve unimaginable things – beyond the comprehension of most in the 21st century – who live under the false illusion that we are pinnacle of evolution and technology. Once we realise that we have been manipulated and lied to for millennia as a species, it becomes easy to figure why and how such technology has been hidden from us. Michael also goes into the UBUNTU Contributionism strategy and the ONE SMALL TOWN plan – which has already been adopted by the first mayor – Ron Higgins of North Frontenac. Join Michael’s mailing list for regular and exclusive updates on the stone circle research in Southern Africa. www.michaeltellinger.com