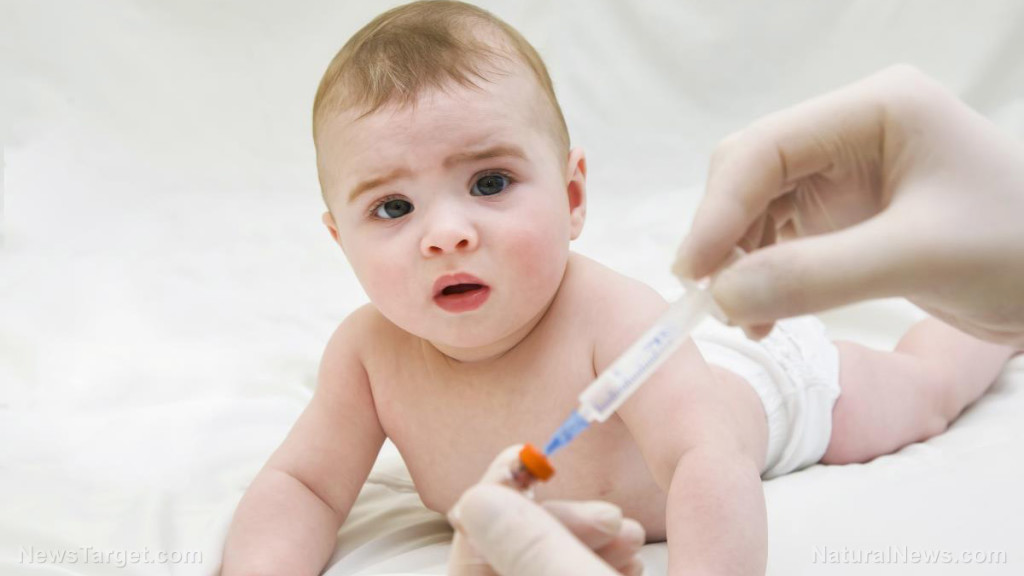 (Natural News) Do you know the vaccine schedule for newborns and infants in the United States? In 2017, there are currently 27 doses of 11 different vaccinations that are currently injected, or orally dispensed, to children up to fifteen months of age. All of these are approved and recommended by the Center for Disease Control (CDC). These vaccines include Rotavirus (RV), Hepatitis B, Influenza, Measles, mumps, rubella (MMR), Tetanus, diphtheria & acellular pertussis (Tdap), just to name a few. The complete list can be found here. All of these vaccines that your pediatrician willingly supplies to your new baby allow foreign and toxic substances to flow into their bloodstream and brain causing unknown damage.

In 1950, as reported by VacTruth.com, a child would only receive “7 vaccines by the age of 6.” In 2013, by the time a child was six years old that number shot up to 36. That’s an increase of 414 percent! How much did the profits of pharmaceutical companies rise in the last 67 years? We can only imagine. But the parents of children injured by this ever multiplying number of required toxic vaccinations don’t always fare so well. WakeingTimes.com reports that during the first half of the current fiscal year, $142 million was awarded to 337 vaccine injured families who had the tenacity, support and appropriate documentation to claim damages in the Vaccine Injury Compensation Program (VCIP). That seems like a paltry sum compared to the enormity of damage and pain that families have endured at the behest of pharmaceutical companies.

The VCIP was created in conjunction with the National Childhood Vaccine Injury Act of 1986 which “granted immunity to pharmaceutical companies and prevented parents from suing vaccine makers for vaccine injuries or death.” It was signed into law by President Reagan although, as reported by the New York Times, he expressed “serious reservations” about the vaccine compensation program. Conversely, Reagan readily endorsed a provision of the bill that would allow, for the first time, “pharmaceutical companies to export drugs to other countries that have approved their use, without waiting for the United States to approve the drugs’ sale here.” It was all about increasing the “competitiveness of the American pharmaceutical industry abroad.” Indeed. But wasn’t it First Lady Nancy Reagan who, almost that very same year, coined the phrase, “Just Say No?”

Over $3.6 billion has been awarded to injured parties since the compensation program began, and it’s not always due to injuries received by children. After 2005,  the influenza shots were being made more available and marketed primarily to adults. Since that time, so many adults have filed claims that it has changed “the proportion of children to adults receiving compensation.”

While there have been many payouts from the court, the majority of families affected by vaccines do not receive the justice they deserve. There are untold vaccine injured families that couldn’t get the support, the documentation, the right representation or the funds they needed to fully prepare their case in order to bring it in front of the court for consideration. One tragic example of this is the case of little Aysia Hope Clark. Aysia was the daughter of Louisiana residents Hope Doucet and Joseph Clark. She was born on May 11, 2015, and sadly, died on July 4, 2015.

Vactruth.com tells the tragic story. Aysia Hope Clark died shortly after receiving eight vaccinations in ten days. These were recommended by her pediatrician even though she had been born premature, was jaundiced and a heart murmur was suspected. The parents were denied the specific medical records necessary to appeal the case to the VCIP. Poor Aysia and her family will never see their day in court. The chart below reveals the ingredients in each of the eight vaccines little Aysia was given. These vaccines are nowhere to be found on the autopsy report. The official cause of death was determined to be “co-sleeping.” 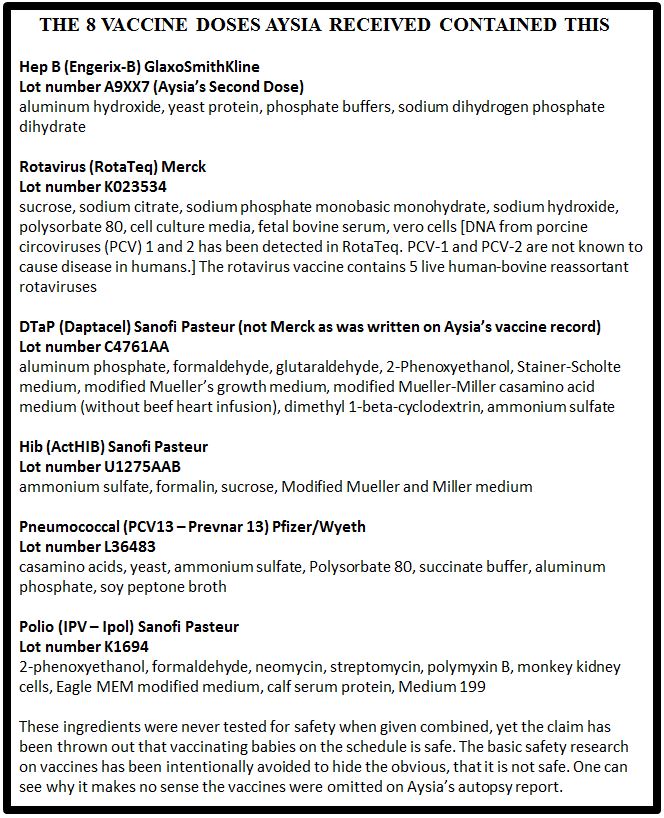