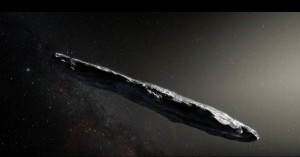 According to a European Southern Observatory (ESO) press release, ‘Oumuamua is “like nothing seen before.” It is red, made of dense rock or metal, and is shaped roughly like a giant cigar at least 400 meters long. These are the findings of a team of astronomers led by Karen Meech (Institute for Astronomy, Hawai`i, USA) who combined images from the ESO’s Very Large Telescope in Chile with other large telescopes. ‘Oumuamua varies dramatically in brightness by a factor of ten as it spins on its axis every 7.3 hours. “This unusually large variation in brightness means that the object is highly elongated: about ten times as long as it is wide, with a complex, convoluted shape.

All Links @ http://www.BPEarthWatch.Com Recorded in 720 HD