By Sharyl Attkisson,publlished on The Hill, on July 15, 2018 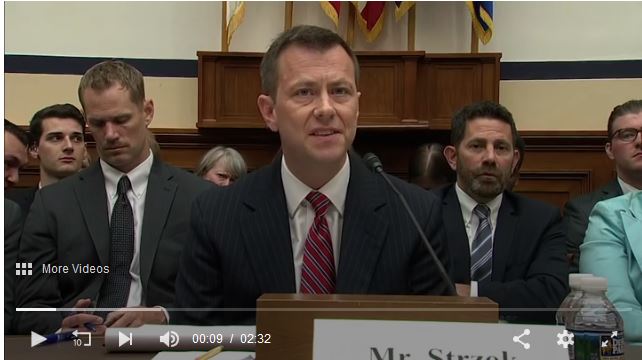 Here are ten things we learned from Peter Strzok’s testimony to Congress about his text messages and other actions:
1. Strzok’s hatred for Trump did not impact any of his professional actions or judgments. How do we know? Because he said so. And he would never lie — he assured us of that, too.

4. Strzok wrote that he “loathed Congress.” But he didn’t mean that, either. It turns out he has “the utmost respect” for Congress.

5. Strzok wrote that he and unnamed others would join to “stop” Trump from ever getting elected. That might appear to be the definition of a conspiracy — or collusion — by a top FBI official to interfere in an election. But we learned Strzok has no memory of writing those words. And, in any event, the “we” referred to the American public —not to anybody in the FBI.

6. Strzok wrote of working with other top FBI officials to develop an “insurance policy” in case Trump were elected. But, again, we learned he would never really do such a thing.

7. Strzok wrote of the “impeachment” of Trump before he’d interviewed a single witness in the Russia probe. But we learned he didn’t prejudge anything.

8. We also learned a lot of important context that justified and recast Strzok’s messages. For example, when Strzok wrote that candidate “Trump is a disaster” and lamented how “destabilizing” a Trump presidency would be, it was after he heard Trump question whether the U.S. should honor its commitment to NATO. What top FBI official in his right mind wouldn’t fire off a message like that on his work phone? It was Trump’s fault for driving Strzok to write the words.

9. We learned that the authority responsible for sorting through Strzok’s personal accounts for additional relevant messages to turn over to Congress is — well, Strzok. And we learned that the number of messages he plans to hand over is exactly zero.

10. We learned from Strzok that all Americans are pretty much like him in terms of having deeply held political beliefs, so it’s not really possible or necessary to find more disconnected arbiters to lead the FBI’s sensitive investigations like the historic probes into 2016 presidential candidates. We learned that nobody at the FBI has ever allowed their personal beliefs to impact their job. It’s nothing more than coincidence that so many official FBI activities in which Strzok took part were very much in line with the vitriol he’d privately expressed against Trump.

Still, after all we learned, a modicum of confusion remains. If Strzok wrote so many things in private to his girlfriend that he now says didn’t really mean — what are we to believe now?

Never mind. We learned from Strzok that questions like that simply fall under the category of “misrepresentations of extreme folks in the media” and “conspiracy theorists.”

If only the Department of Justice’s inspector general hadn’t recovered the controversial messages Strzok sent to his FBI girlfriend, using his work devices, after the messages had been deleted in an unusual technical glitch at the FBI, Strzok likely would still be serving on special counsel Robert Mueller’s team — fairly and impartially investigating a president he despises.

It’s great that Strzok cleared everything up. It was not only appropriate for him to send the messages that he did, it was downright “patriotic.” It sure looks like a major injustice was committed in taking him off the job.